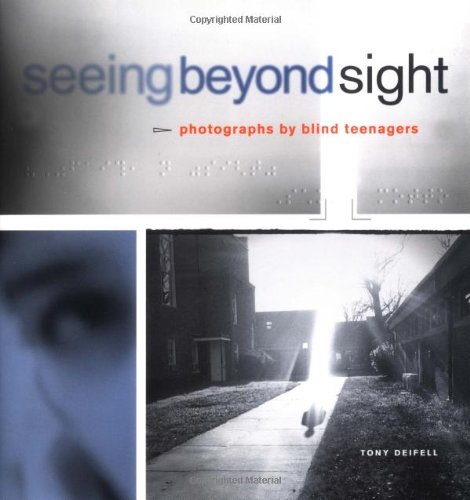 Seeing Beyond Sight: Photographs by Blind Teenagers
by Robert Coles
Publisher's Description
Photography wasn't the obvious subject to teach at Governor Morehead School for the Blind in Raleigh, North Carolina. Even Jackie, one of the first three students to take the class, was incredulous: 'What are you thinking, teaching photography to blind people?'

As a photographer, I feared losing my eyesight and began to wonder, 'If I were blind, could I still make photographs?' A rabbi once told me that in the Talmud, blind people are referred to as 'sagi nahor,' an Aramaic expression that means 'great eyesight.' As the rabbi explained, perhaps people who are blind see more than those who are sighted; perhaps there is seeing beyond sight. As the son of a preacher, I have been predisposed to mystical interpretations most of my life, so this paradox affirmed an intuition I had about these unlikely photographers.

The cameras were point-'n'-shoot, so the challenge was mostly where to point them. The students would ask questions about their surroundings, feel their subjects, and listen carefully to the hush and noise around them.

When I saw Leuwynda's pictures of the sidewalk, I thought they were a mistake. Perhaps she had intended to capture a classmate or one of the large oak trees scattered across the campus. I was wrong. As soon as Leuwynda had her camera, she knew what she wanted to do - photograph the cracks in the sidewalk. The pictures were proof of the damage, and she sent them along with a letter to the Superintendent. 'Since you are sighted,' Leuwynda wrote, 'you may not notice these cracks. They are a big problem since my white cane gets stuck.' Leuwynda asked for the cracks to be fixed - and they were.

The fact that I had not noticed the cracks in the sidewalks at Governor Morehead School has stayed with me for years. Leuwynda's story is about more than cracks in a sidewalk; it is about all the cracks that go unnoticed. I began wondering what other cracks I unconsciously step over.

In the beginning of the photography class, the students' pictures seemed banal - trees, pets, clocks - or simply mistakes. If I had found all the pictures from the project in an unmarked box in my grandmother's attic, I may have disregarded them. But, as soon as I understood the hidden meaning behind Leuwynda's sidewalk pictures, everything looked different. All the images became unfamiliar, as if they were hidden puzzle pieces that held a secret to a much larger picture.

Seeing Beyond Sight is about seeing in the broadest sense. I use the physical behavior of light as a metaphor for the book's five chapters: Distortion, Refraction, Reflection, Transparence & Illuminance. Light is what makes it possible for the eye to see - and to make photographs - but we don't usually see light itself. I thought of these five chapters as a journey towards light - towards an illuminance that is beyond everyone's eyesight - although the source of light is not fully known. The road is already dark enough as we wade through distortions and refractions to explore ourselves and our relationship with the world. Ultimately, we may catch only a glimmer of a picture larger than us - an image of the world that is just beyond our full grasp.
—Tony Deifell from Seeing Beyond Sigh'
ISBN: 0811853497
Publisher: Chronicle Books
Hardcover : 152 pages
Language: English
Dimensions: 7.7 x 8 x 0.8 inches