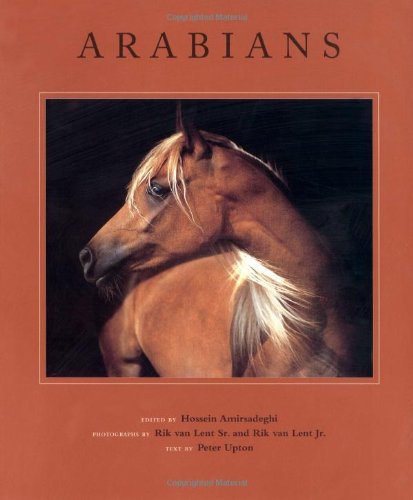 Arabians
by Rik van Lent
Publisher's Description
Handsomely packaged in paperback with a new cover, Arabians is a lavishly illustrated celebration of the impressive history and splendor of this noble breed. Three hundred gorgeous color photographs and illustrations take the reader on a visual journey around the world, and an authoritative text explores the breed's ancient origins and its importance in the Islamic world. This definitive book—a must-have for all equestrians—includes a comprehensive list of Arabian horse organizations, registries, and societies; a glossary of Arabic terms; and a thorough bibliography.
Amazon.com Review
The oldest breed of horse in the world, the Arabian's beginnings are anything but humble. Born, according to ancient Arab tales, of the south wind, coming from Hoshabeh, now Yemen:

To create the Arab horse, God spoke to the south wind: "I will create from you a being which will be a happiness to the good and a misfortune to the bad. Happiness shall be on its forehead, bounty on its back and joy in the possessor."

When it comes to talking about Arabian horses, such passion is not unusual, and it's a passion that author Peter Upton and editor Hossein Amirsadeghi, along with photographers Rik van Lent, Sr. and Jr., lovingly share in Arabians: The Classic Arabian Horse. Both a stunning photographic journey--composed of more than 250 full-color photographs, arranged by geographical area--and a fascinating history lesson, Arabians begins with a thorough examination of the horse's origins, which date back to 1700 B.C. Such notable historical figures as the prophet Mohammed and the queen of Sheba were Arabian devotees. The breed's popularity spread outside of the Arab world beginning in the last half of the 17th century, peaking in the 19th and early 20th centuries. Other areas of discussion include the distinct features and characteristics of the breed (its exquisite head and high tail carriage as well as its "vigour, courage and great powers of endurance") and the numerous strains and substrains of the breed, which, when combined with a glossary of Arabic terms and a complete listing of Arabian horse organizations, registries, and societies, truly make Arabians the "definitive book on this revered breed." --Stefanie Hargreaves
ISBN: 0811854019
Publisher: Chronicle Books
Paperback : 256 pages
Language: English
Dimensions: 10.1 x 11.6 x 0.8 inches