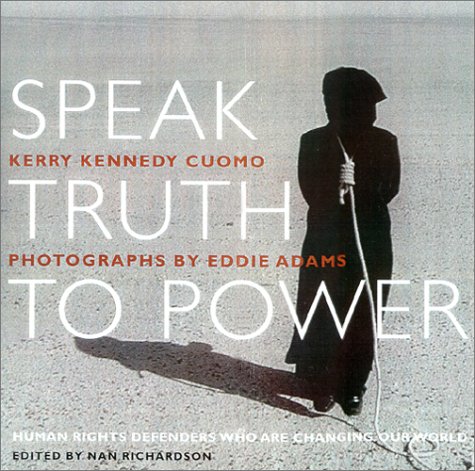 Speak Truth to Power : Human Rights Defenders Who Are Changing Our World
by Kerry Kennedy Cuomo
Amazon.com Review
Anonymous wears a black shroud and a hangman's noose. Unnamed and masked, perhaps he or she will avoid the fate suggested in the haunting photograph that graces the cover of this remarkable book. Anonymous is one of the mostly unsung heroes interviewed by Kerry Kennedy Cuomo who are fighting for human rights in places where torture, imprisonment, and death are the side effects of speaking out against such atrocities as child soldiers, sex slavery, honor killings, and repression of political rights. In Anonymous's case, teaching Sudanese women their rights where a civil war is being waged by Islamic extremists could land him or her in a "ghost house" of torture, or, if lucky, in prison for an undetermined amount of time. In an age when heroes seem almost a thing of the past, these 51 human rights defenders demonstrate that real moral courage is alive and well on planet Earth. As Kennedy Cuomo writes in her introduction, these are the Martin Luther Kings of the world, and "courage, with its affirmation of possibility and change, is what defines them."

For instance, there is Ka Hsaw Wa, who, after hearing stories of horrific torture and abuse from Burmese villagers, took the bold step of bringing a lawsuit against the American oil company Unocal for using human rights abuses to further its profit margins. To protect himself as he gathers documentation, he travels the jungle in black clothes and has had to interview victims using only his memory for lack of pen and paper. Fauziya Kassindja came to her work through no choice of her own--when she fled Togo to escape genital mutilation she found herself shackled and abandoned in the U.S. prison system, and has become a force for change in both countries. Others have seen a need and filled it, such as Muhammed Yunus, who has achieved miraculous results in Bangladesh by giving small loans to those who no one else would entrust with money--poor women without collateral. The results have been nothing less than the transformation of the women, their families, and the political landscape of a nation.

There are also the famous here: Desmond Tutu, Elie Wiesel, Rigoberta Menchu Tum. Václav Havel speaks on becoming a dissident and the divine, while the Dalai Lama talks about compassion, suffering, and nonviolence. These are extraordinary people, and yet they are as human as the rest of us. As Oscar Arias Sanchez says, "One works for justice not for the big victories, but simply because engaging in the struggle is itself worth doing." An inspiring work made beautiful by photographs by renowned photographer Eddie Adams. --Lesley Reed

Publisher's Description
Speak Truth to Power presents inspiring heroes from more than thirty-five countries, including Baltasar Garzón, Desmond Tutu, the Dalai Lama, Asma Jahangir, and Wangari Maathai. In searing and uplifting interviews, veteran human rights defender Kerry Kennedy Cuomo examines the quality of courage with women and men who are dramatically changing the course of events in their communities and countries. Imprisoned, tortured, and threatened with death, they speak with compelling eloquence on subjects to which they have devoted their lives and for which they have been willing to sacrifice from free expression to the rule of law, from women’s rights to religious liberty, from environmental defense to eradicating slavery, from access to capitol to the right to due process.
ISBN: 0812930622
Publisher: Crown
Hardcover : 256 pages
Language: English