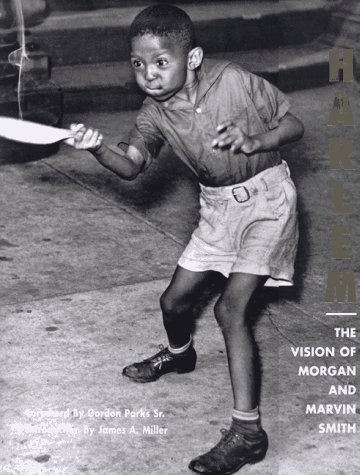 Harlem: The Vision of Morgan and Marvin Smith
by Morgan Smith
Publisher's Description
In 1933, Morgan and Marvin Smith, twin sons of sharecroppers from central Kentucky, arrived in Harlem, the center of black cultural life in America. Despite the hardships of the Great Depression, they found a flourishing arts community and quickly established their place as visual chroniclers of the life of the city. For thirty years, the Smiths used their cameras to record the achievements of blacks in the face of poverty and discrimination. Rejecting the focus on misery and hopelessness common to Harlem photographers of the time, they documented important 'firsts' for the city's blacks (for example, the first black policeman, the first black women juror), the significant social movements of their day (anti-lynching protests, rent strikes, and early civil rights rallies), as well as the everyday life of Harlem, from churchgoers dressed for Easter to children playing in the street. The Smiths' photography and art studio was next to the famed Apollo Theatre, and it became a required stop for anyone making a pilgrimage to the community. There and elsewhere the Smiths photographed actors, musicians, dancers, artists, athletes, politicians, businessmen, and educators. They captured Maya Angelou early in her career as a Primus dancer, W.E.B. DuBois recording a speech in their sound studio, Joe Louis at his training camp, Jackie Robinson teaching his young son to hold a baseball bat, Nat King Cole dancing at his wedding, Billie Holiday singing for friends, Josephine Baker distributing candy to children, and many other prominent figures at significant and ordinary moments of their lives. Drawn from the collection of the Schomberg Center for Research in Black Culture and the Smith family archives, Harlem reproduces nearly 150 photographs by these important artists and chroniclers, bringing to life a vital community of great cultural, political, and economic achievement. Morgan Smith died in 1993. Marvin Smith lives in New York City.
Amazon.com Review
In chronicling the daily life in Harlem during the '30s and '40s, brothers Morgan and Marvin Smith capture the spirit of a community. The two left Kentucky for New York City in 1933 with a journalist's sense of what is important and an artist's eyes with which to capture it. The brothers' cameras lit upon children playing in the streets and couples dancing the Lindy, as well as famous Harlem dwellers such as Billie Holiday, Fats Waller, and a young Maya Angelou. But, more importantly, the Morgans documented critical firsts for the African American community: Harlem's first postal telegram messengers; Virginia Pope, the first African American juror to serve in New York City; and Thurgood Marshall, the first African American United States Supreme Court justice. The body of their work tells the story of a community flourishing both culturally and spiritually, despite the challenges of social injustice and poverty. And the Morgans became so intertwined with Harlem itself that their studio, located next door to the Apollo Theater, became a necessary stopping point for anyone visiting the area.
ISBN: 0813120292
Publisher: The University Press of Kentucky
Hardcover : 184 pages
Language: English
Dimensions: 10.2 x 13.2 x 0.7 inches