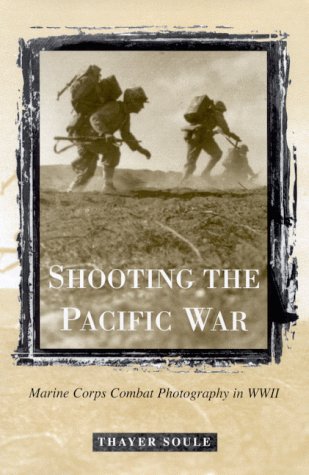 Shooting the Pacific War: Marine Corps Combat Photography in WWII
by Thayer Soule
Publisher's Description
Combining his photographic work in the Pacific arena during WWII with stories and recollections of what life was like in the Marine Corps, Soule has created a document that is at once engaging and incredible. A first hand account of some of the most harrowing battles in the Pacific.
Amazon.com Review
Fortune favored Thayer Soule. He witnessed the slaughter at Iwo Jima and spent four months under fire on Guadalcanal, yet never received a scratch. When he joined the Marines in 1941, before he had even begun basic training, he was given command of an entirely new organization, the photographic office of the Marine Corps's First Division. Starting from nothing, with great ingenuity, he created a unit that made training films and photographed action against the enemy. He embraced new technology; when he discovered that the military's maps of the Solomon Islands dated from 1910 and were full of errors, he created new maps from aerial photographs. Though obviously very talented, he recounts his story in an unassuming way and with good humor. His unique position gave him extraordinary access to senior officers fascinated by new uses of the technology, access that he exploited to the full. His anecdotes of the men he met, from generals and admirals to sergeants and privates, show acute psychological insight. He tells of the terror of war and the bitter loss of close friends, but leavens his tale with the comradeship that seems to be the strongest memory of old soldiers. Shooting the Pacific War is a lively and unusual account of a gifted photographer's experiences in World War II. --John Stevenson
ISBN: 081312137X
Publisher: The University Press of Kentucky
Hardcover : 272 pages
Language: English
Dimensions: 6.3 x 9.2 x 0.9 inches