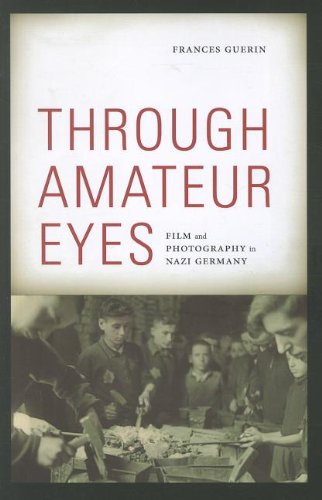 Through Amateur Eyes: Film and Photography in Nazi Germany
by Frances Guerin
Publisher's Description
We have seen the films of professionals and propagandists celebrate Adolf Hitler, his SS henchmen, and the Nazi Party. But what of the documentary films and photographs of amateurs, soldiers, and others involved in the war effort who were simply going about their lives amid death and destruction? And what of the films and photographs that want us to believe there was no death and destruction? This book asks how such images have shaped our memories and our memorialization of World War II and the Holocaust. Frances Guerin considers the implications of amateur films and photographs taken by soldiers, bystanders, resistance workers, and others in Nazi Germany.

Her book explores how photographs taken by soldiers and bystanders on the Eastern Front, depictions of everyday life in the Lódz ghetto, and home movies and family albums of Hitler’s mistress Eva Braun, among others, can challenge the conventional idea that such images reflect Nazi ideology because they are taken by perpetrators and sympathizers. Through Amateur Eyes upsets our expectations and demonstrates how these images can be understood as chillingly unrehearsed images of war, trauma, and loss.

Many of these images have been reused—often unacknowledged—in contemporary narratives memorializing World War II: museum exhibitions, made-for-television documentaries, documentary films, and the Internet. Guerin shows how modern uses of these images often reinforce well-rehearsed narratives of cultural memory. She offers a critical new perspective on how we can incorporate such still and moving images into processes of witnessing the traumas of the past in the present moment.
ISBN: 0816670072
Publisher: Univ Of Minnesota Press
Paperback : 352 pages
Language: English
Dimensions: 6.3 x 9 x 0.8 inches