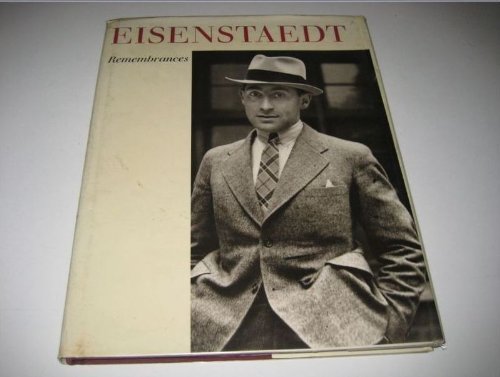 Eisenstaedt: Remembrances
by Doris C. O'Neil
Publisher's Description
Remembrances presents a wide-ranging look at Eisenstaedt's career, from his earliest work done in Germany in the 1930's through his long career at Life magazine. Among the 140 photographs are portraits of the famous--statesmen, writers, actors, scientists, and politicians--as well as warm, telling images of ordinary people and charming scenes of everyday life.
Amazon.com Review
If you really want to know what the 20th century looked like from a front-row seat at the main stage, this book will show you. Alfred Eisenstaedt, who was born in 1898 and lived until 1995, apparently didn't miss a thing. To give but a glimpse of the view he captured, this volume, published on the hundredth anniversary of his birth, includes scores of his most famous photographs. The portrait of a scowling Joseph Goebbels, Hitler's Minister of Culture and Propaganda, showing exactly what educated evil looks like; a sultry Marilyn Monroe, somewhat fuzzy around the edges because the flustered photographer used the wrong film; the adorable Mary Martin (pre-Pan), girlishly singing a Cole Porter tune; Jackie Kennedy, radiant, seated between her husband and the man who would succeed him; Bertrand Russell; Martin Buber; Helen Keller; Albert Einstein; Gordon Parks; Rebecca West; Learned Hand--they're all here.

There is no way for any collection to do real justice to a photographer of Eisenstaedt's reach, but this book goes far, including not just the celebrity images but many others that give a keen sense of the times in which he lived. There is a streetwalker in knee-high boots on the Rue Saint-Denis; a polished Rolls-Royce in front of the Ritz; an aged accordionist begging for a living outside Carnegie Hall; a Mississippi fiddler.

Like those of his contemporaries Cartier-Bresson, Lartigue, and Kertész, Eisenstaedt's photographs stop you in your tracks, their meanings more complexly layered with every passing decade. Take his shot of 5- and 6-year-olds, wide-eyed and screaming at a puppet show in a Paris park in l963, just as television was beginning its long, depressing siege on childhood's imaginative realm. Or the image of women in their spring chapeaus, taking afternoon tea on the roof of the Excelsior Hotel in Florence in 1934, pretending that their pleasant world would endure. The historical resonance of such images is what makes this a thinking person's book, but of course it is possible to love it just for the celebrities, nearly all of them now gone. --Peggy Moorman