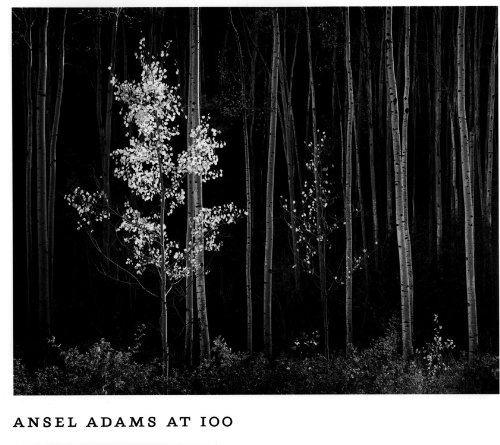 Ansel Adams at 100
by Ansel Adams
Publisher's Description
Amazon.com Review
Ansel Adams at 100 celebrates the centenary of one of America's best-loved photographers. This superlative catalog of an exhibition organized by San Francisco Museum of Modern Art presents the most dramatic and the most delicate of Adams's formal compositions, from spectacular mountainscapes to grasses on a pond, all reflecting his avowedly religious relationship to nature. Previously unpublished examples of Adams's early images show how he worked through the day, using changing light and different vantage points to interpret a subject. A fascinating comparison of his darkroom techniques is given in two printings of a 1948 negative of Mount McKinley, made in 1949 and 1978 to very different effects, one brooding and luminous, the other crisp and monumental. (The conventional wisdom is to prefer the earlier, but this reviewer loves them both.) The text by John Szarkowski, director emeritus of New York MoMA's photography department, gives biographical details and gracefully places Adams in the history of 20th-century photography and the conservation movement. Impeccable technical standards were a hallmark of Adams's work, and this book follows his tradition. Each black-and-white image is a tritone, meaning that it was printed from three different plates corresponding to different parts of the original photograph's gray scale, resulting in an extremely rich chromatic range. Light really does appear to glisten off a wet rock, and white aspens to glow. The images have been very carefully chosen, each page of a double spread complementing the other. The book's paper is custom-made, it is bound in linen and presented in a linen slipcase, and a complimentary facsimile of one of Adams's icons is included. The whole adds up to a most unusual and pleasing artifact: Ansel Adams at 100 consciously sets out to be the definitive study of a master, and it succeeds. --John Stevenson
ISBN: 0821225154
Publisher: Ansel Adams
Hardcover : 200 pages
Language: English
Dimensions: 14.2 x 13.1 x 1.5 inches