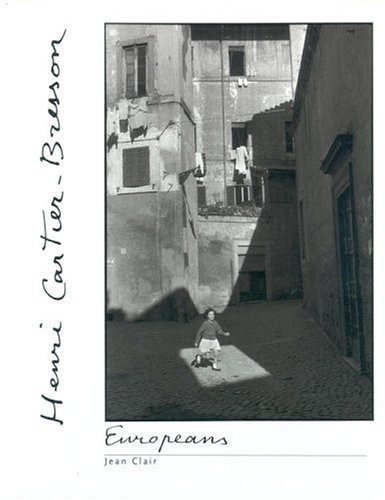 Europeans
by Jean Clair
Publisher's Description
This much sought after Cartier-Bresson collection has never before been available in the U.S. Focusing exclusively on images from Europe, it captures the spirit of work that has influenced countless photographers.
Amazon.com Review
Henri Cartier-Bresson's amazing feat as a photographer is the ability to follow his heart and the keen vision of his mind and eye in each photograph. His subjects are only part of the image in the viewfinder, whose composition he sometimes arranges with geometric precision. Many of his best photographs also have startlingly broad political and sociological connotations, which gives the ordinary subjects extraordinary dignity, even grandeur. Europeans is filled with these images, which are often visually complex as well: a 1952 picture depicts a poor immigrant tilling hard ground while in the distance the prosperity-propelled factories of industry belch smoke into already smoggy skies. This is not just a picture of a poor man, or industrial power, or the contrast between the two. It's an open question about the meaning of life, with an anonymous no one--just another human being--at its center. Another wonderful image in this collection is a 1954 shot of a handsome soldier ogling two pretty women. It shows that even at the bleakest moments in their social history, Muscovites were not immune to pheromonal persuasion.
ISBN: 0821225227
Publisher: Bulfinch
Hardcover : 232 pages
Language: English