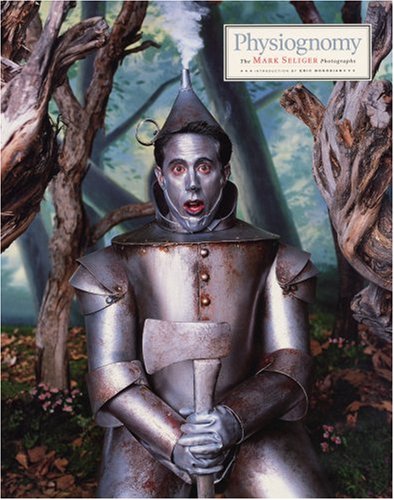 Physiognomy: The Mark Seliger Photographs
by Mark Seliger
Publisher's Description
These dynamic images, seen all over the pages of Rolling Stone magazine, carry on the tradition of celebrity portraiture first pioneered by Annie Leibovitz. Seliger's carefully crafted photographs humorously reveal the iconic qualities of Hollywood and pop music stars.
Amazon.com Review
Mark Seliger's book is filled with a riveting cast of characters culled from the celebrity subjects he shoots as the chief photographer for both Rolling Stone and US magazines. A particularly stirring image is a 1987 Rolling Stone shot of Perry Farrell watering a sunflower garden. It is a powerful photograph, made all the more so by the fact that it is the image that essentially launched Seliger's career as one of today's leading music photographers. In the book's introduction, Eric Bogosian discusses the public's infatuation with celebrity, and how it is the photographer's job to capture that fleeting moment, that millisecond that encompasses the subject's spirit. And the artists that Seliger has caught in these moments are wildly diverse. His portraits of musicians range from seldom-photographed country stars like Loretta Lynn and Kitty Wells to Marilyn Manson, Tom Petty, Curtis Mayfield, and Courtney Love. His portraits of Drew Barrymore are among the best of her to date: the playfulness of Barrymore's personality shines through his depictions of her as Alice in Wonderland, a sumo wrestler, a boxer, and the only female boy scout at the mercy of her troop. Seliger displays a keen sense of color, and these photos jump off the page shouting for attention. His black-and-white portraits seem to try for a greater intimacy, and even though they still convey Seliger's sense of play, they are less theatrical than his flamboyant color work. There are, though, beautiful black-and-white portraits here of Sean Penn, Kurt Cobain, Joni Mitchell, and John Lee Hooker, to name a few. Seliger writes: "One of the challenges and benefits of working for Rolling Stone and US is having the opportunity to capture artists just as they're breaking through." This collection includes some very early photos of celebrities readers have come to know well over the years--and it is a fascinating to see how much of their personality he's captured on film. --Amra Brooks
ISBN: 0821225987
Publisher: Bulfinch Press
Hardcover : 224 pages
Language: English
Dimensions: 11.3 x 14.5 x 1.2 inches