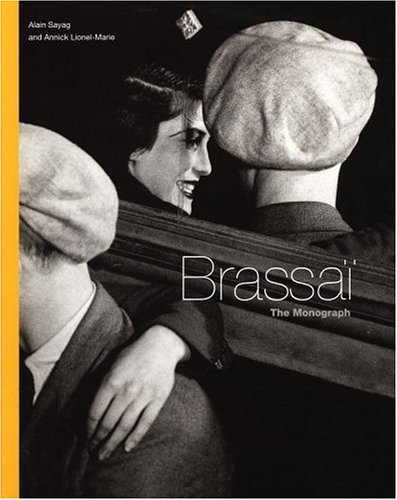 Brassai: The Monograph
by Brassaï
Publisher's Description
With text by renowned Brassaï expert, Roger Grenier, and edited by the curators of the Centre Georges Pompidou, Alain Sayag and Annick Lionel-Marie, this breathtaking monograph features the work made in Paris from the 1930's that brought Brassaï international recognition. Lavishly illustrated in a classically designed volume.
Amazon.com Review
"The meaning of art is not authenticity but the expression of authenticity," wrote the Hungarian-born photographer Gyula Halász, better known as Brassaï, whose unflinching yet deeply sensual portraits of the seamier side of Paris nightlife during the 1930s and 1940s summon up an era when decadence and desperation ran side by side. Brassaï's curiosity about his subjects and the originality of his approach highlight the depth of his identification with Paris, his adopted city. The son of a professor of French literature, Brassaï had first visited the city at the age of 5; later, in the early 1920s, he returned to make it his home after completion of studies in fine art in Budapest and Berlin. Settling in the bohemian arrondissement of Montparnasse, mixing with artists and writers, Brassaï took up photography "in order to capture the beauty of streets and gardens in the rain and fog, and to capture Paris by night." He lures us into the smoky, highly charged world of clubs and cafés, where nicotine-stained lovers in cheap clothes become impossibly desirable through the camera's lens. Streets, stairways, and canals are moodily lit; even a man rummaging for food in a rubbish bin takes on a cinematic aura. Yet Brassaï's photographs contain a strange mixture of seediness and resilience that ultimately triumphs over any false notions of glamour. He depicts scenes of poverty and its trappings--alcoholism, prostitution, violence, hunger. The chaotic social whirl of 1930s Paris dies down to the quiet suffering of a city under occupation, with its two great literary lights, Jean-Paul Sartre and Simone de Beauvoir, sitting out the war, stony-faced in the Café de Flore. Accompanied by extracts from Brassaï's own writings, contemporaries such as Henry Miller, and essays from other contributors, and containing 308 images, Brassaï is a fine testament to an artist whose images of one city have proved so enduring. --Catherine Taylor, Amazon.co.uk
ISBN: 0821226681
Publisher: Bulfinch
Hardcover : 320 pages
Language: English
Dimensions: 9.8 x 12.2 x 1.5 inches