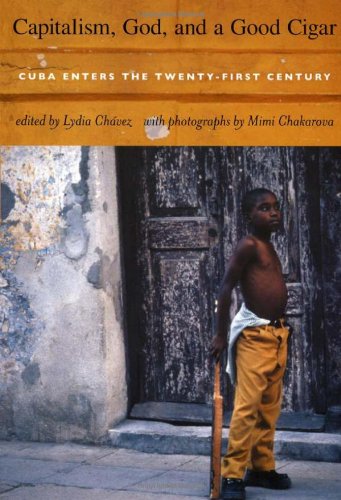 Capitalism, God, and a Good Cigar: Cuba Enters the Twenty-first Century
by Lydia Chavez
Publisher's Description
When the Soviet Union dissolved, so did the easy credit, cheap oil, and subsidies it had provided to Cuba. The bottom fell out of the Cuban economy, and many expected that Castro's revolution—the one that had inspired the left throughout Latin America and elsewhere—would soon be gone as well. More than a decade later, the revolution lives on, albeit in a modified form. Following the collapse of Soviet communism, Castro legalized the dollar, opened the island to tourism, and allowed foreign investment, small-scale private enterprise, and remittances from exiles in Miami. Capitalism, God, and a Good Cigar describes what the changes implemented since the early 1990s have meant for ordinary Cubans: for hotel workers, teachers, priests, factory workers, rap artists, writers, homemakers, and others

Based on reporting by journalists, writers, and documentary filmmakers since 2001, the thirteen essays collected here each cover a particular dimension of contemporary Cuban society, revealing what it is like to have lived, for more than a decade, suspended between communism and capitalism. There are pieces on hip hop musicians, fiction writing and censorship, the state of ballet and the performing arts, and the role of computers and the Internet. Other essays address the shrinking yet still sizeable numbers of true believers in the promise of socialist revolution, the legendary cigar industry, the changing state of religion, the significance of the recent influx of money and people from Spain, and the tensions between recent Cuban emigrants and previous generations of exiles. Including more than seventy striking documentary photographs of Cuba's people, countryside, and city streets, this richly illustrated collection offers keen, even-handed insights into the abundant ironies of life in Cuba today