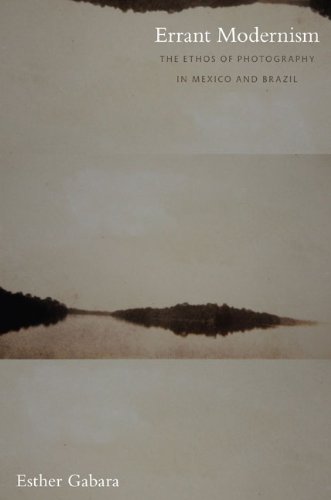 Errant Modernism: The Ethos of Photography in Mexico and Brazil (a John Hope Franklin Center Book)
by Esther Gabara
Publisher's Description
Making a vital contribution to the understanding of Latin American modernism, Esther Gabara rethinks the role of photography in the Brazilian and Mexican avant-garde movements of the 1920s and 1930s. During these decades, intellectuals in Mexico and Brazil were deeply engaged with photography. Authors who are now canonical figures in the two countries’ literary traditions looked at modern life through the camera in a variety of ways. Mário de Andrade, known as the “pope” of Brazilian modernism, took and collected hundreds of photographs. Salvador Novo, a major Mexican writer, meditated on the medium’s aesthetic potential as “the prodigal daughter of the fine arts.” Intellectuals acted as tourists and ethnographers, and their images and texts circulated in popular mass media, sharing the page with photographs of the New Woman. In this richly illustrated study, Gabara introduces the concept of a modernist “ethos” to illuminate the intertwining of aesthetic innovation and ethical concerns in the work of leading Brazilian and Mexican literary figures, who were also photographers, art critics, and contributors to illustrated magazines during the 1920s and 1930s.

Gabara argues that Brazilian and Mexican modernists deliberately made photography err: they made this privileged medium of modern representation simultaneously wander and work against its apparent perfection. They flouted the conventions of mainstream modernism so that their aesthetics registered an ethical dimension. Their photographic modernism strayed, dragging along the baggage of modernity lived in a postcolonial site. Through their “errant modernism,” avant-garde writers and photographers critiqued the colonial history of Latin America and its twentieth-century formations.
ISBN: 0822343231
Publisher: Duke University Press Books
Paperback : 376 pages
Language: English
Dimensions: 6 x 9 x 1.1 inches