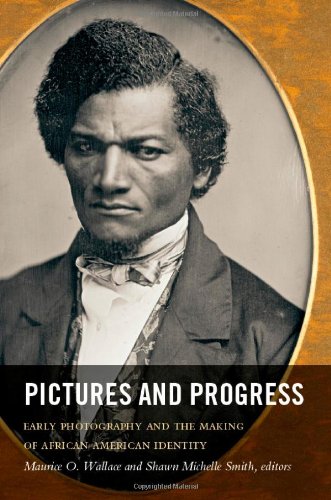 Pictures and Progress: Early Photography and the Making of African American Identity
by Maurice O. Wallace
Publisher's Description
'With its emphasis on the often radical roles that black sitters and makers assumed in the history of photography, Pictures and Progress offers a bold approach to the study of American visual culture, one that places black agency at its center. Its intriguing and persuasive essays elucidate the importance of photography to the creation of free, black personhood in the 19th and early-20th centuries and reveal the myriad and sometimes surprising ways that such hands sought to wield 'the pencil of nature' in an effort to assert self-possessed, and therefore revolutionary, subjectivities during an era in which the dominant culture preferred to represent them as otherwise.' Gwendolyn DuBois Shaw, author of Portraits of a People: Picturing African Americans in the Nineteenth Century 'Pictures and Progress offers a new understanding of visual representations of black Americans in the nineteenth and twentieth centuries. Through its compelling essays, this work reframes the archive of images of death, beauty, and suffering of black subjects in photography.' Deborah Willis, New York University
ISBN: 0822350858
Publisher: Duke University Press Books
Paperback : 400 pages
Language: English
Dimensions: 6.5 x 9.8 x 1.1 inches