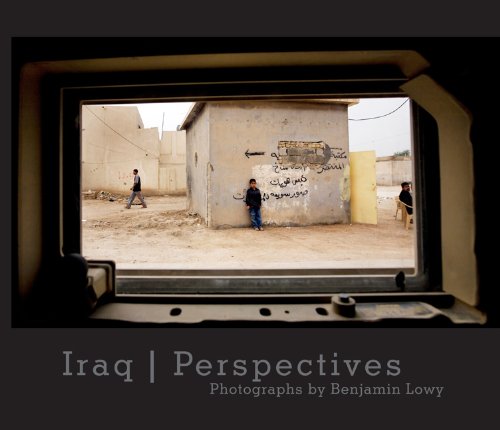 Benjamin Lowy’s powerful and arresting color photographs, taken over a six-year period through Humvee windows and military-issue night vision goggles, capture the desolation of a war-ravaged Iraq as well as the tension and anxiety of both U.S. soldiers and Iraqi civilians. To photograph on the streets unprotected was impossible for Lowy, so he made images that illuminate this difficulty by shooting photographs through the windows and goggles meant to help him, and soldiers, to see. In doing so he provides us with a new way of looking at the war—an entirely different framework for regarding and thinking about the everyday activities of Iraqis in a devastated landscape and the movements of soldiers on patrol, as well as the alarm and apprehension of nighttime raids.

“Iraq was a land of blast walls and barbed wire fences. I made my first image of a concrete blast wall through the window of my armored car. These pictures show a fragment of Iraqi daily life taken by a transient passenger in a Humvee; yet they are a window to a world where work, play, tension, grief, survival, and everything in between are as familiar as the events of our own lives. . . . (In) the ‘Nightvision’ images . . . as soldiers weave through the houses and bedrooms of civilians during nighttime military raids, they encounter the faces of their suspects as well as bystanders, many of whom are parents protecting their children. . . . I hope that these images provide the viewer with momentary illumination of the fear and desperation that is war.”—Benjamin Lowy