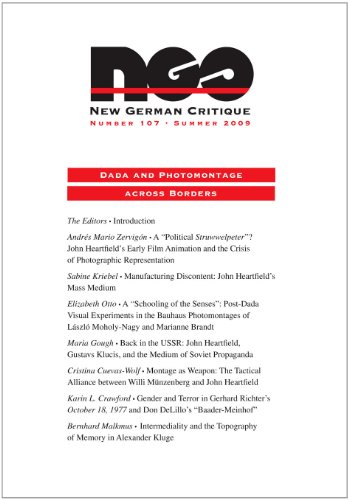 Dada and Photomontage across Borders (New German Critique, Number107, Summer 2009)
by Andreas Huyssen
Publisher's Description
This special issue of New German Critique explores the art of Dada and photomontage in transnational contexts. Dadaism, an art movement cultivated during World War I, questioned traditional aesthetics and eventually led to the formation of surrealism. Focusing on Dada’s achievements in building a network of artists in Europe and America, this issue examines photomontage as an integral part of the movement, as well as its relationship to mass media, photography, propaganda, constructivism, and left-wing politics in the Soviet Union and western Europe during the 1920s and 1930s.

The central figure of the issue is John Heartfield, a Dadaist who influenced much of the art world in Europe after World War I. The collection investigates Heartfield’s lesser-known early work with cinema in the service of the German High Command. Believing that photographic cinema was akin to war propaganda, Heartfield rejected live-action war footage in favor of American cinematic animation to promote an honest discussion about the horror and realities of war. One essay explores Heartfield’s photomontages while turning to film theory as a way of interpreting the politics of his work, demonstrating how his photomontages retain the organic and traditional nature of photography even as they produce cognitive dissonance and satire. Another essay on Heartfield’s role in Soviet discussions of the 1930s offers fascinating insights based on new archival research. The issue also looks at the relationship between Heartfield and the illustrated German magazine Arbeiter-Illustrierte-Zeitung and how that magazine influenced photomontage across Europe.
ISBN: 082236722X
Publisher: Duke University Press Books
Paperback : 252 pages
Language: English
Dimensions: 5.8 x 8.8 x 0.7 inches