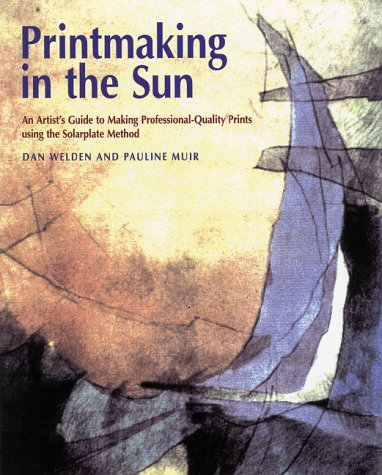 Printmaking in the Sun
by Dan Welden
Publisher's Description
Perhaps the biggest kept secret in alternative photographic processes today, this book outlines a relatively new photo-polymer gravure printing process that is truly non-toxic. Using nothing but water, the plate-making and printing process is described by Russ Young, one of the book's contributing photographers, as the most direct and easiest to use of any of the polymer gravure processes currently available. Young described how all elements of the process can be kept right on one table in the home--everything from the plate, to the printing, to the drying of final works. Printmaking is written by the creator of this particular version of the process, and is a thorough explanation of all aspects of the process.
Amazon.com Review
Printmaking in the Sun introduces a revolutionary new printmaking technique known as the solarplate method, first developed in 1972 by one of the book's authors, Dan Welden. He had begun experimenting with light-sensitive polymer plates in place of traditional metal plates, which frees the artist from exposure to poisonous lead fumes. To make a solarplate print, one creates a piece of artwork on film, overlays it on a solarplate, and exposes the film and plate together in the sun. The drawing is transferred to the plate, which is then developed in ordinary tap water. The resulting image appears in the same orientation as the original drawing. This book exhaustively covers the techniques of solarplate printing, describing how to use the proper equipment and materials, prepare relief and intaglio images, make and print relief and intaglio plates, expose your work to the sun, use digital images and photogravure, and work with color printing. The book is generously illustrated with color and black-and-white solarplate images by accomplished artists, as well as clear step-by-step illustrations depicting how to prepare and process your images and plates. The book also contains a comprehensive glossary, selected further reading, and list of suppliers in the United States and Australia. The innovative techniques described in Printmaking in the Sun form an enormous resource of versatile, imaginative applications. Artists of all levels will appreciate the fluidity of creative expression inherent in such a simple and immediate process. --Mary Ribesky
ISBN: 0823042928
Publisher: Watson-Guptill
Paperback : 144 pages
Language: English