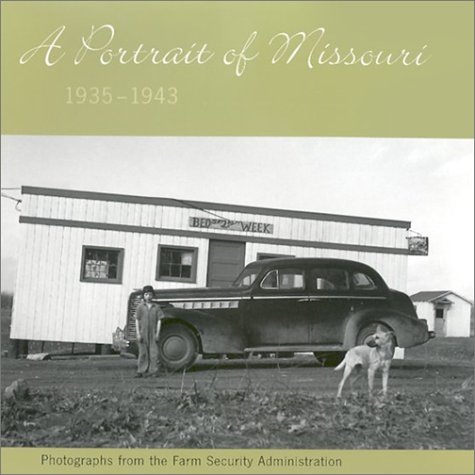 'The photographs are engrossing. They show the efforts of the Farm Security Administration to illustrate the problems of the 1930s and the results of the programs designed by the New Deal to address these problems. More than simply being a vehicle of persuasion, however, these photographs document the way Missourians lived during the period.'
-Lawrence Christensen

Among FDR's New Deal programs were those created to address rural poverty and a depressed farm econ omy. In 1935, several such programs were consolidated into the Resettlement Administration, which in 1937 became the Farm Security Administration (FSA). By 1943, the FSA had been phased out, but during its short life, it was at the center of a turbulent battle over the shift from regional to national authority. One way the FSA sought to defend itself against political attacks was by building up popular support through its Photographic Section, under the direction of Roy Stryker.

Stryker, who was once referred to as 'the press agent of the underprivileged,' directed a team of photographers who documented American life in the thirties, seeking to justify a new agricultural order. Seven of these photographers traveled in Missouri and produced a collection of over 1,250 pictures. Drawing on those photographs, A Portrait of Missouri, 1935-1943 chronicles the photographers' work, the programs they sought to promote, and slices of life they captured in Missouri between 1936 and 1943.

Small town life, desperate farm conditions, urban renewal, and the 1939 sharecroppers' strike are all brought to life in these intriguing photos. However, A Portrait of Missouri, 1935-1943 is more than a picture book. Through its introductory essay and comments woven throughout the text, the book recounts the effects of the depression on Missouri. It traces the changing nature of agriculture in the early part of the twentieth century, with special attention to how social and economic changes were tied into demands for political changes. The photographs from the FSA file help the reader examine the growth of national government and its intended and real effects on our lives.

Political realities, including limited resources that allowed the FSA to serve only a fraction of the population that sought aid, and organized opposition based in part on class and race, limited the achievements of the FSA. Sixty years after its demise, the FSA is still seen as a savior by some and a bedeviler by others. A Portrait of Missouri, 1935-1943 helps the reader better understand the debate over the FSA, while providing a unique glimpse of mid- western American life in the 1930s.