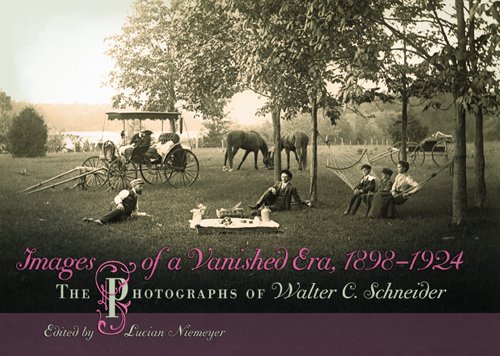 Images of a Vanished Era, 1898-1924: The Photographs of Walter C. Schneider
by Lucian Niemeyer
Publisher's Description
Picture America at the turn of the twentieth century. Walter Schneider did. It was America's 'era of innocence,' with change in the wind. The horse and buggy were giving way to the horseless carriage, dirt streets were being paved, and electricity was lighting up the night. From this era comes a previously unknown body of photographic work, representing the talent and skill of a young artist and offering us glimpses of a simpler time. Walter Schneider became interested in photography while still a teenager but kept up his avocation as a law student and attorney. Using primitive equipment and films in a time of conversion from wet- to dry-plate photography, he produced vibrant images of America during its years of transition from an agrarian to an industrial society and documented the emergence of the middle class as the economy grew. Schneider produced some twelve hundred glass-plate negatives, which were stored in a basement for decades and only recently discovered by photographer Lucian Niemeyer. This book contains 168 of the best images, capturing scenes in the artist's hometown of Kankakee, Illinois, and his schooling at the University of Wisconsin and also ranging widely across America and the world. Through images of domestic scenes and festive crowds, rural tranquility and burgeoning industry, we can see how America was coming to terms with a new age. Turn-of-the-century Kankakee was pure Americana, with recreation along its river provided by steam-powered paddle boats in summer, ice-skating in winter. Images of a Vanished Era distills the essence of that era and also reflects Schneider's travels: city scenes in New York and Chicago; photos taken on bicycle trips through ruralIndiana, Kentucky, and Tennessee in the days before paved roads; and views of Europe before the First World War, when Schneider bicycled from Germany to Italy with his cameras, plates, and developing equipment. All reflect the work of a consummate artist and skilled technician who was a master of his trade. These are photographs brimming with social commentary and nostalgia that will fascinate anyone whose familiarity with this period is limited to the recollections of older relatives. Images of a Vanished Era documents the early craft of an emerging art while offering a new window on the past.
ISBN: 0826217230
Publisher: University of Missouri
Hardcover : 192 pages
Language: English
Dimensions: 10.2 x 7.2 x 1 inches