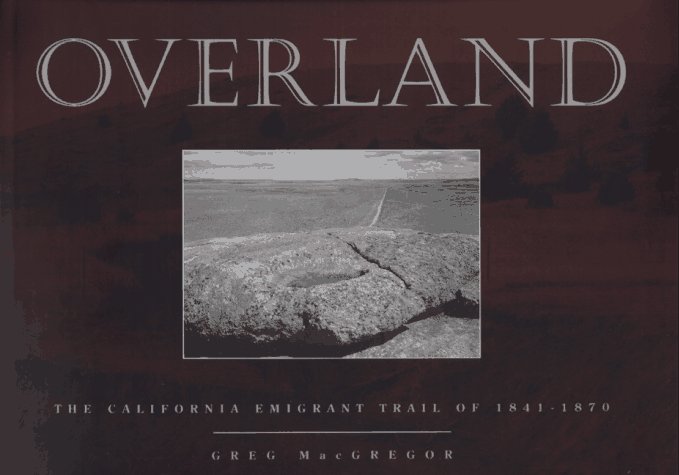 Overland: The California Emigrant Trail of 1841-1870
by Greg MacGregor
Publisher's Description
For emigrants heading West in the 1800s there were many starting points, and many ends, but the Overland trail was the only route across the vast center of the country. Greg MacGregor, a professor of photography at Cal State Hayward, has reassembled the trail, now overgrown and neglected, from old dairies and travellers accounts. Overland collects those narratives, MacGregor's own writings, and the photographs he has made travelling thousands of miles researching and unearthing the Overland Trail.
Amazon.com Review
Greg MacGregor spent fifteen years on this project, photographing the traces of the mid-19th century Emigrant Trail, which saw some 500,000 Americans set out in covered wagons from starting points like Independence, Missouri, toward California and Oregon. The routes taken by these wagons were so fixed that there are indeed ghostly wheel ruts in the solid rock and faint but indelible marks of human struggle across the American deserts. MacGregor includes pictures of pioneer graveyards and views of sites long paved over, their history resonant only in the extant diaries of those who made the journey. Extracts from such diaries and anecdotes about the places in the photos make an excellent supplement to the photographic document.
ISBN: 0826317030
Publisher: Univ of New Mexico Pr
Hardcover : 153 pages
Language: English