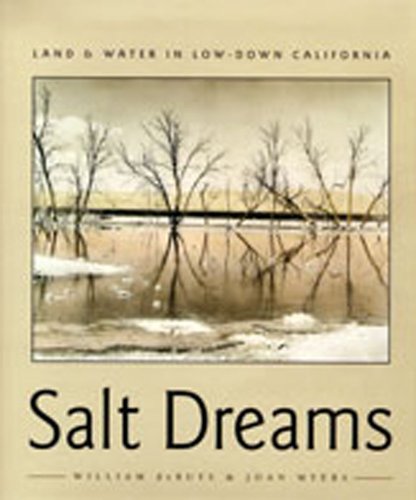 Salt Dreams: Land and Water in Low-Down California
by Joan Myers
Publisher's Description
As California's southern counties drop below sea level, their water troubles multiply. Myers, one of the West's most sensitive chroniclers, creates a complex portrait of subdivisions gone awry, overfarmed land, and poorly managed water out of control.
Amazon.com Review
William Smythe, a Southern California booster, was not alone when in 1900 he expressed his hope that "the great brown waste which lies on the borders of two republics... will some time be as densely populated as the lands of the Nile, as rich in industry as the Kingdom of Holland."

A century later, the coastal desert of Southern California has indeed become a rich and populous place. The interior desert, however, along the U.S.-Mexico border, is as empty and poor as ever. Historian William deBuys and photographer Joan Myers explore that country, its virtual capital the salt-choked Salton Sea, in the pages of this fine book, which offers a deeply learned but readable study of the politics of water and land use in the arid Southwest. DeBuys remarks that for Europeans and Americans the land has always seemed a geographic tabula rasa, subject to making and remaking, a landscape in which dreams can come true--one of them being to remake an unforgiving desert into an agricultural treasure house. Those dreams, however, can turn into nightmares, as speculations fail and dunes reclaim what is rightfully theirs--for, as deBuys notes, "in low places consequences collect." Desert rats and students of California history will find many rewards in these pages. --Gregory McNamee