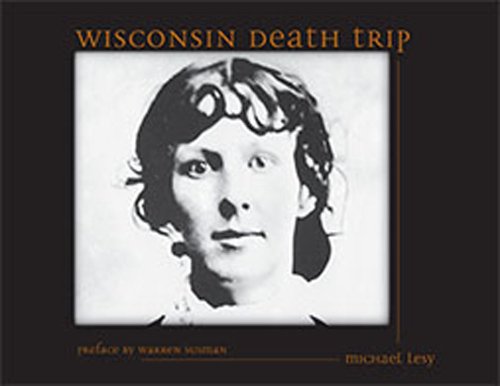 Wisconsin Death Trip
by Charles Van Schaik
Publisher's Description
First published in 1973, Michael Lesy's remarkable book about life in a small, turn-of-the-century, Wisconsin town has become a cult classic. Having been out of print for years, it is again available in a faithful paperback edition.
Amazon.com Review
The last decade of the 19th century was, for some Americans, a time when great fortunes were to be made. For many others, however, the period was a time of economic dislocation, when the gap between city and countryside, rich and poor, grew ever wider. As the Indian Wars ended and the Gilded Age extended into America's first Imperial Age, social critics such as Mark Twain and William Dean Howells began to examine the dark side of the American dream: violence, poverty, degenerate behavior, suicide, and insanity.

In the late 1960s, another desperate time, historian Michael Lesy took a long look at fin-de-siècle America. Examining a collection of several thousand glass plate negatives and historical documents from Jackson County, Wisconsin, he concocted a sprawling treatise on a past that had been willfully forgotten, a brooding rejoinder to Edgar Lee Masters's Spoon River Anthology. First published in 1973, Lesy's Wisconsin Death Trip, now reissued in a handsome paperbound edition, became a key text of the counterculture, a book to shelve alongside Bury My Heart at Wounded Knee and Custer Died for Your Sins--and it sometimes reads like a hip product of its time. Lesy documents the unsettling record of one small corner of rural America, turning up accounts of barn burnings, attacks by gangs of armed tramps, threatening and obscene letters, death by diphtheria and smallpox (the Wisconsin townsfolk had, some years, to attend several funerals a week), alcoholism, madness, business and bank failures, and even a case or two of witchcraft.

After reading Lesy's texts and viewing the sometimes unsettling images he's turned up, you would be forgiven for thinking that no one in small-town Wisconsin in our great-great-grandparents' time was well-adjusted--which is, of course, not the case. Hyperbole notwithstanding, this is a remarkable study, one that Lesy himself rightly calls an experiment in both history and alchemy. --Gregory McNamee