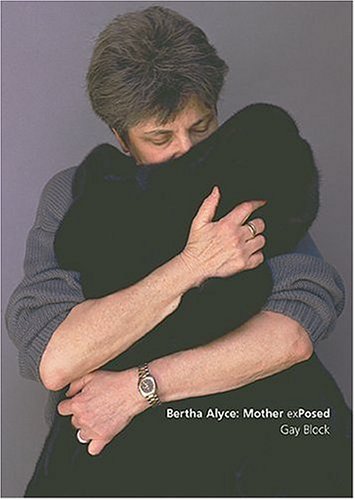 Bertha Alyce: Mother exPosed
by Gay Block
Publisher's Description
Gay Block began photographing her mother, Bertha Alyce, in 1973 and continued until Bertha Alyce's death resulting from a stroke in 1991. This collection of Block's photographs (sections of which involve nudity) presents her complicated, and at times difficult, relationship with her mother and a mother-daughter quest for healing. This intensely personal and intimate account could easily be a reflection of any family today. Essays by Eugenia Parry, author of Crime Album Stories: Paris 1886-1902, and Kathleen Stewart Howe, curator of the University of New Mexico Museum, accompany the photographs. To complete the presentation, the award-winning DVD 'Bertha Alyce' is included (28 minutes in length).

'An extended portrait of a mother and daughter that will fray the edges of documentary expectations.'--James Enyeart, Marion Center for Photographic Arts, Santa Fe

'A poignant investigation into the nature of love and memory, including resentment, forgiveness, jealousy and understanding.'--Cheryl Younger, International Photography Institute, New York

'This is a funny, sad, provoking, and touching book that I most admire for its honesty.'--Anne Wilkes Tucker, Museum of Fine Arts, Houston

Gay Block's photographs have been exhibited in museums since 1975, including a solo exhibit at New York's Museum of Modern Art in 1992 when her collaboration on Rescuers: Portraits of Moral Courage in the Holocaust with writer Malka Drucker was published. Block lives in Santa Fe.
ISBN: 0826330940
Publisher: University of New Mexico Press
Hardcover : 290 pages
Language: English
Dimensions: 7 x 9.6 x 1.1 inches