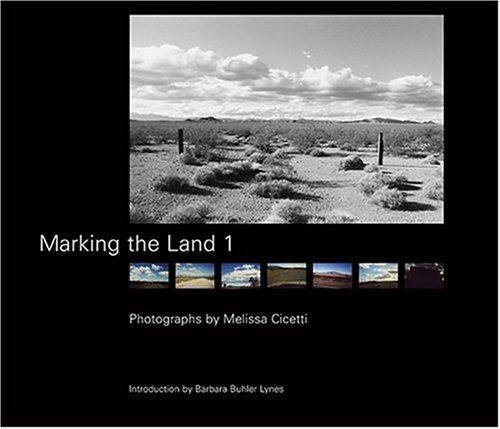 Marking the Land 1 (No. 1)
by Melissa Cicetti
Publisher's Description
A road trip from Santa Fe to Santa Monica was the genesis of Marking the Land 1, which presents photographs taken on highways and byways that cut through the vastness of the American Southwest. In documenting sites separated from one another by hundreds of miles, Melissa Cicetti sought to explore and expand her understanding of the concept of place. She characterizes sites that have been made specific by the interaction between various areas of the land and the human-made forms imposed on them.

Cicetti's interest in architecture is reflected in many of the photos, which include abandoned structures-barns, churches, gas stations, Anasazi ruins. Fences and wires impose human patterns on the desert landscape even though the photographs never include people.

'A sequence of documented, personal moments through which the viewer can come to terms with the photographer's concept of place and the role humans have played over the centuries and always will play in marking places in the land and assigning them meaning.'-Barbara Buhler Lynes, Introduction

Melissa Cicetti is an architect and a photographer currently living and working in New York City. She formerly was an assistant professor in the School of Architecture and Planning at the University of New Mexico, Albuquerque. Barbara Buhler Lynes is curator of the Georgia O'Keeffe Museum and director of the O'Keeffe Museum Research Center, Santa Fe.
ISBN: 0826332382
Publisher: University of New Mexico Press
Paperback : 133 pages
Language: English
Dimensions: 10.4 x 9.1 x 0.5 inches