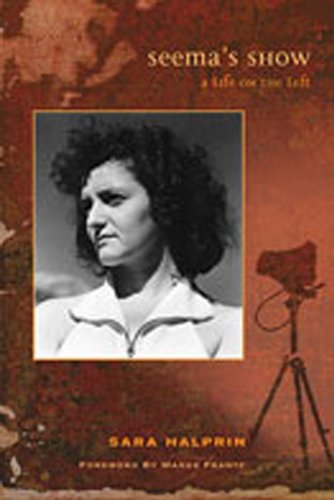 Seema's Show: A Life on the Left (CounterCulture Series)
by Marge Frantz
Publisher's Description
At seventeen Seema Aissen got her first job drying prints in a photo-finishing lab in Boston and joined the newly-founded Young Communist League; at thirty-three she was hired by Ansel Adams to run his darkroom in Yosemite; at thirty-seven she married the writer Jack Weatherwax and devoted herself to supporting his work; widowed at seventy-nine she began a new life; at ninety-five she had her first photographic exhibit. Sara Halprin began recording interviews with Seema in 1986 and took the title and narrative frame for this book from that first show.

Seema's Show follows Seema's life from her birth in 1905 to radical Jewish parents in Czarist Russia, emigration to England, then Boston and Los Angeles, where she joined the Film and Photo League, began her lifelong work for racial justice, and formed enduring friendships with artists and political activists including Edward Weston, Imogen Cunningham, and Woody Guthrie. In 1984 Seema moved to Santa Cruz, California, where she became a central figure in progressive culture and began, in 2000, to show her own work.
ISBN: 082633847X
Publisher: University of New Mexico Press
Paperback : 260 pages
Language: English
Dimensions: 6 x 8.8 x 0.8 inches