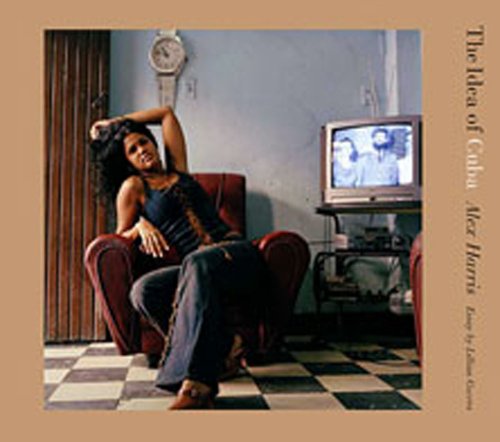 The Idea of Cuba
by Lillian Guerra
Publisher's Description
'Everyone seems to be waiting. A young woman in a pink shirt leans against a pillar. Two men sit on a stoop and look in her direction. Like most Havana streets, this one, Calle Zapatos in Santos Surez, has seen better days. A glance reveals generations of faded paint, cracked plaster, and worn-down sidewalks. It's a curious kind of waiting-at once lethargic and restless-that I've become accustomed to in Cuba. Whatever is going to happen seems a long way off.'-Alex HarrisThis remarkable journey into contemporary Cuba by photographer and writer Alex Harris is both a powerful and mysterious evocation of life on the island and an original meditation on the nature of documentary photography that reveals what Harris has learned over thirty-five years as a documentary photographer. Like his mentor, Walker Evans, who photographed Cuba in 1933 at a pivotal political moment, Harris arrived in Cuba with his camera at a crossroads in Cuban history. Well known for over thirty-five years of photographic work in the Hispanic Southwest, Alaska, and the American South, Harris made three trips to Cuba to photograph a nation coming to grips with the economic and social devastation that followed the collapse of the socialist bloc in 1989, a nation beginning to imagine a future without Fidel Castro. On each trip to Cuba, Harris used a different approach to peer deeper into the fabric of Cuban society. In the foreground of Harris's photographs and text are some of the archetypes of contemporary Cuban life: the indomitable 1950s American car, the beautiful young woman, and the revered revolutionary hero. Yet Harris recasts these symbols. We don't look at the car, but through it to consider the tangledrelationship between Cuba and the United States. His portraits of young women challenge us to consider the nature of our gaze and to see the changing status of Cuban women in relation to Castro's political survival. The Cuban hero Jos Mart, a repeated icon in Harriss photographs and the focus of his text, evokes Marts constant physical and spiritual presence for the Cuban people. Indeed, Mart is at the heart of this book, a visual and textual mantra giving us insight into the Cuban national character and helping us to understand what gives Cubans-on the island or in exile-their enduring strength and their hope for the future. In her accompanying essay, Yale historian Lillian Guerra confronts the paradox of Cuba from a different perspective. An American daughter of Cuban exiles, she has visited the island repeatedly to conduct research and to try to understand what it means to be Cuban.
ISBN: 082634139X
Publisher: University of New Mexico Press
Hardcover : 152 pages
Language: English
Dimensions: 11.2 x 10 x 0.7 inches