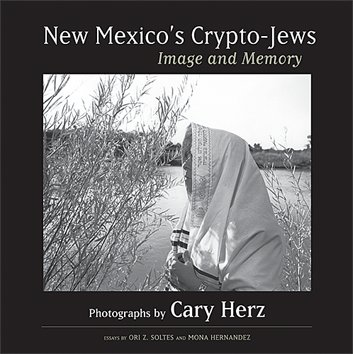 New Mexico's Crypto-Jews: Image and Memory
by Cary Herz
Publisher's Description
While photographing the Congregation Montefiore Cemetery in Las Vegas, New Mexico, in 1985, Cary Herz first heard whispers about 'the other people.' Thus began a twenty-year search for descendants of crypto-Jews, the Sephardic Jews who were forced to convert to Catholicism during the Spanish and Portuguese Inquisitions centuries ago. Many openly professed Catholicism, but continued to practice the Jewish faith privately.

Herz's photographs and the accompanying essays honor the people whose ancestors, through families' oral histories and genealogical records, knew about their heritage. Other New Mexican Hispanics have recently begun to explore their families' customs and are only beginning to examine their possible blended lineage. To help complete her exploration, Herz sought out symbols - gravesites, artifacts, and icons - that might point toward the presence of the descendants of crypto-Jews who came to the New World. There has recently been a renewed interest in crypto-Jews, as DNA tests have revealed the Jewish heritage of a number of Hispanic New Mexicans.
ISBN: 0826342892
Publisher: University of New Mexico Press
Hardcover : 176 pages
Language: English