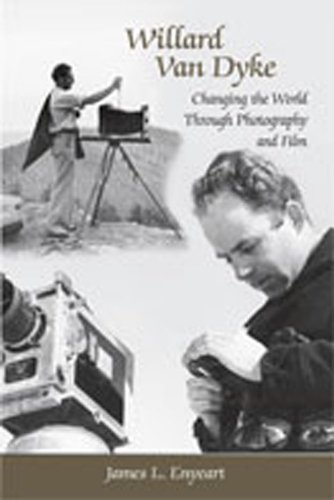 Willard Van Dyke: Changing the World Through Photography and Film
by James L. Enyeart
Publisher's Description
Willard Van Dyke worked his way through the twentieth century chasing two illusive muses-photography and film. They were illusive because their powers, reality, and abstraction, are morphic extremes that both exalt and mislead artists who believe that harnessing one will overcome the other.

The setting for Van Dyke's life story is thus connected to the story of how these two muses changed the way the world was perceived. Willard Van Dyke stepped into the early twentieth century clamor asking for photography's recognition as an art form. He was among the few to bridge both photography and film in the 1920s. Through his broad-reaching vision he provided history with significant achievements in both. His works are admired by the practitioners of both mediums, and he is acclaimed in the literature of both fields. He was driven by an insatiable desire to effect change and a compulsion to gain power over systems and ideas in art and society alike.

Van Dyke's place in history is secure based largely on works created during the 1930s and 1940s in close association with colleagues like Ansel Adams and Edward Weston in photography, and Ralph Steiner and Pare Lorentz in film. Willard Van Dyke's story is about unrelenting devotion to social consciousness and artistic integrity, draped like thick veils over his own failings and emotional isolation.
ISBN: 0826345522
Publisher: University of New Mexico Press
Hardcover : 328 pages
Language: English
Dimensions: 5.9 x 9 x 1.1 inches