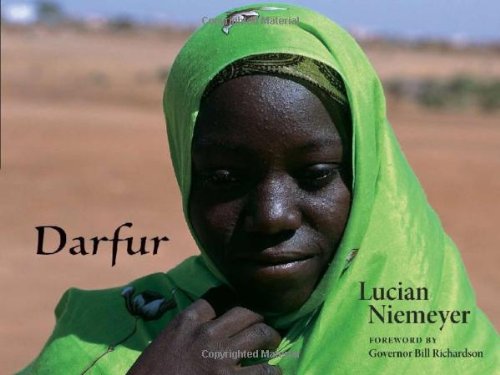 Darfur
by Lucian Niemeyer
Publisher's Description
Darfur, located in westernmost Sudan, is that nation's largest region, situated on the border with Chad. For centuries, northern Sudan has been predominantly Arab Muslim and the south, black African. Ruled as a colonial state by, primarily, Egypt and Britain, Sudan was granted independence in 1956 with Khartoum, in the northern Arab Muslim territory, as its seat of power.

In 1983, the Sudanese government announced that all of Sudan would officially be a Muslim country. The 'sharia,' the Muslim code of laws, became the rule: those not Muslim are deemed unclean and infidels. Southern Sudan began resisting the genocide waged by the Muslim north. This resistance led to the 1992 announcement of a holy jihad by the Sudanese government, leading to today's humanitarian crisis in Darfur.

'Lucian Niemeyer understands that to truly tell the story of the turmoil in Darfur and Sudan one must understand the history and root causes that brought the Sudan and its people to this situation. His breathtaking photographs and compelling narrative tell the definitive story of the conflict and will help the readers across the globe to understand the true nature of the genocide and the people caught up in it every day. . . . I applaud him for this wonderful book and join him in his urgent cry for help for those oppressed in Sudan who cannot speak for themselves.'-Governor Bill Richardson, from the Foreword
ISBN: 0826346197
Publisher: University of New Mexico Press
Hardcover : 104 pages
Language: English
Dimensions: 12.2 x 9.1 x 0.7 inches