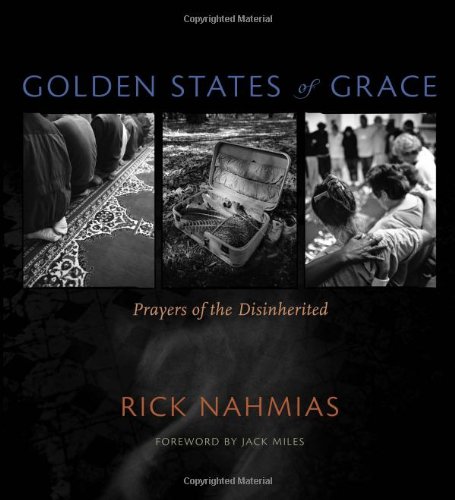 Golden States of Grace: Prayers of the Disinherited
by Rick Nahmias
Publisher's Description
Taking California as a window into the diversity of religion in America, Golden States of Grace documents marginalized communities at prayer in their own faith traditions. The collection is thoroughly interfaith, introducing us to the nation's only halfway house for addicts self-identified as Jewish, a transsexual gospel choir, a Buddhist community in San Quentin, a Mormon congregation organized by the deaf for the deaf, Latina sex workers worshipping the female folk deity Santi­sima Muerte, and more. Depictions of conventional middle-class religion are widely visible in the media, but the American public rarely sees the sacred worlds of society's marginalized: the outcasts, the fallen, those that have been labeled 'other' -- ironically, those whom religion aims to serve. The poignant stories Nahmias has gathered here cross numerous boundaries and ask difficult questions few outsiders have been willing to pose.

“Golden States of Grace brings together such depth and diversity of faith and humanity, that it is seems three- dimensional. It is hard to think of another body of work which looks so compassionately at the faces and voices of disinherited peoples while asking us to think deeply about how we own or disown those on the margins. This is a book for anyone who has ever felt left out, pushed out, or just wondered what it feels like to be on the outside-that is, a book for all of us.” -Sister Helen Prejean, author of Dead Man Walking