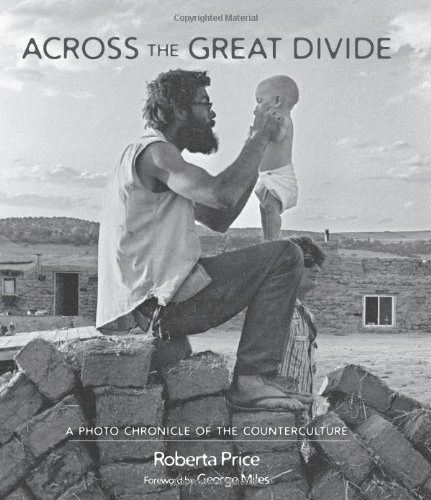 Across the Great Divide: A Photo Chronicle of the Counterculture
by Roberta Price
Publisher's Description
In 1969 Roberta Price received a grant and traveled west to explore and photograph the communes that had begun to spring up in New Mexico and Colorado. Over the next eight years she took more than 3,000 photos of commune life, and now she has selected 121 images for publication in a visual memoir that reflects on her experiences and invites us to contemplate the rural counterculture of her youth.

Unlike most photographers of the back to the land movement, Price 'went native,' joining a Colorado community and living there for seven years. Her photo documentation of her years at Libre provides a unique view of commune life through the eyes of a participant. We see residents building homes, raising families, and celebrating community.

Price's photographs of Drop City, New Buffalo, Reality Construction Company, Libre, the Red Rockers, and other southwestern communes capture long-haired men, women in self-made peasant attire, psychedelic art, sheaves of marijuana, cast-iron stoves, and preindustrial agricultural practices 'visual evidence of the great divide that separated Price, her friends, and associates from the families and neighbors among whom they had grown up. The photos also reveal the presence of record players, amplifiers, and electric guitars, along with a staggering array of architectural and interior design, and visits by such iconoclasts as Ken Kesey, Peter Orlovsky, and Allen Ginsberg. The most famous cliche about the era is that if you can remember it, you weren't there. Price was there with her camera, and her images help us see it more clearly now.
ISBN: 0826349579
Publisher: University of New Mexico Press
Hardcover : 120 pages
Language: English
Dimensions: 8.7 x 10 x 0.8 inches