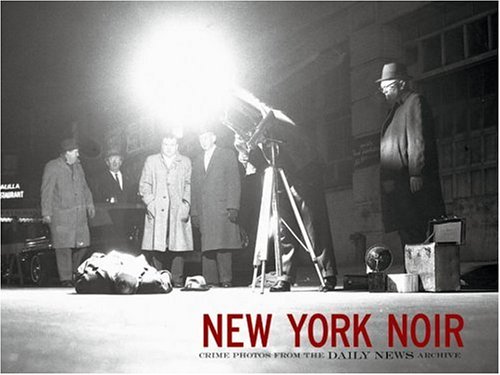 New York Noir: Crime Photos from the Daily News Archive
by William J. Hannigan
Publisher's Description
Including an historical essay detailing the development of tabloid photography and a Luc Sante essay exploring the viewing of crime photos as art, New York Noir is a gripping, hard-boiled collection of brutal news shots from New York's Daily News.
Amazon.com Review
When Ruth Snyder was electrocuted at Sing Sing Prison in 1928, New York Daily News photographer Tom Howard was there--with a miniature camera he'd hidden under the cuff of his pants. The resulting snapshot made the front page the next morning (under the headline "DEAD!") and provoked fierce controversy among those wondering if tabloid journalism had finally gone too far. But, as Luc Sante points out in his introduction to New York Noir, a selection of pictures from the Daily News archives, the tabloids "retailed exclamation points"--Snyder in the electric chair was merely an extreme example of imagery that was a regular staple of the paper's coverage.

Many of the photos in New York Noir are not for the squeamish: corpses in the street or slumped in their car seats appear regularly, as do battered and bloodied criminals and suspects. But the power of these stark images is unmistakable--they are, as the book's title indicates, the raw material for the gritty vision of urban life that film noir popularized. For some people, tabloid crime photos are synonymous with Arthur "Weegee" Fellig; only one of his pictures graces these pages, however, and the other photographers represented here (many identified only by last name or no name at all) demonstrate that his reputation relies as much on promotional hustle as on artistic merit. Whenever possible, archivist William Hannigan supplies background information on the people and incidents in the pictures--but it is the images themselves, rather than the stories, that will stick in the reader's mind. --Ron Hogan