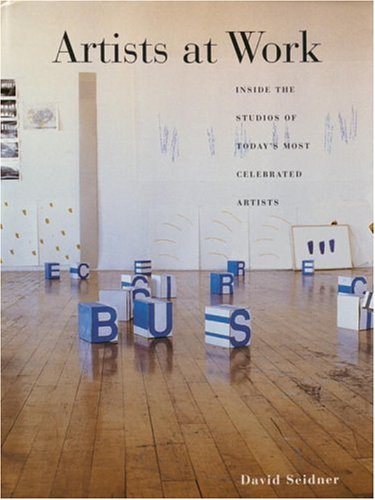 Artists at Work: Inside the Studios of Today's Most Celebrated Artists
by David Seidner
Publisher's Description
Amazon.com Review
Artists at Work is the sort of irresistible book that has come along frequently since artists and their working spaces became almost as fascinating as art itself. The first such tome, perhaps, was Brian O'Doherty and Hans Namuth's classic, American Masters: The Voice and the Myth, in which the minds and studios of such giants as Edward Hopper, Willem de Kooning, and Mark Rothko are toured. Artists at Work has an equally illustrious cast: Louise Bourgeois, John Cage, the late Roy Lichtenstein and Joan Mitchell, Terry Winters, Jasper Johns, and, in this context, younger artists like Ross Bleckner, Roni Horn, Philip Taaffe, and Cindy Sherman. Photographer David Seidner visits 20 artists in all, and his pictures are themselves exceedingly artful--balanced, clear, somewhat soulful.

There is a lot to see here--Joan Mitchell's boxes of fat pastels, and her mangled, well-used paint tubes and housepainter's brushes; Terry Winters's glass, flat-bottomed pestles; Richard Serra's cluttered worktable. Artists at Work, however, has the slightly slick look of a fashion project. And, unfortunately, Seidner's brief essays are not illuminating enough. While most are fawning, he is not always kind, mocking Louise Bourgeois with a backhanded, mincing fervor. Some of his observations are irritating for their airiness: "[Brice Marden's] looks and his physique--especially when he has his hair long and wears his black jeans--give him an eternally youthful quality." Others--his continual references to "my good friend," "my dear friend," etc.--make readers appreciate, more than ever, the substantive text Brian O'Doherty offered an earlier generation of artists. --Peggy Moorman