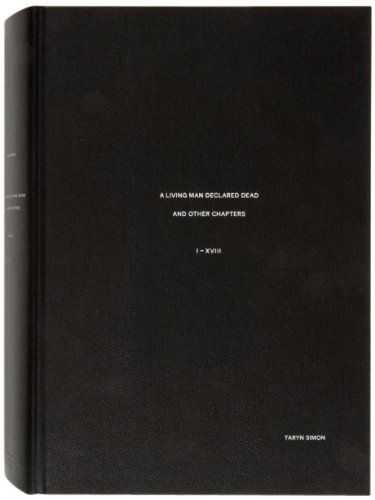 Taryn Simon: A Living Man Declared Dead and Other Chapters, I-XVIII
by Homi Bhabha
Publisher's Description
A significant and extensive book on a major new body of work by the American artist Taryn Simon. Taryn Simon: A Living Man Declared Dead and Other Chapters, I-XVIII was produced over a four-year period (2008-2011), during which Simon travelled the world researching and recording bloodlines and their related stories. In each of the eighteen 'chapters' that make up the work, the external forces of territory, power, circumstance, or religion collide with the internal forces of psychological and physical inheritance. Her subjects feuding families in Brazil, victims of genocide in Bosnia, the first woman to hijack an aircraft, and the living dead in India. Her collection is at once cohesive and arbitrary, mapping the relationships among chance, blood, and other components of fate. This volume accompanies the exhibitions at Tate Modern, London (May 2011), Neue Nationalgalerie, Berlin (September 2011), and the Museum of Modern Art, New York (May-September 2012).
ISBN: 0847840182
Publisher: Rizzoli
Hardcover : 864 pages
Language: English
Dimensions: 11 x 14.3 x 3.3 inches