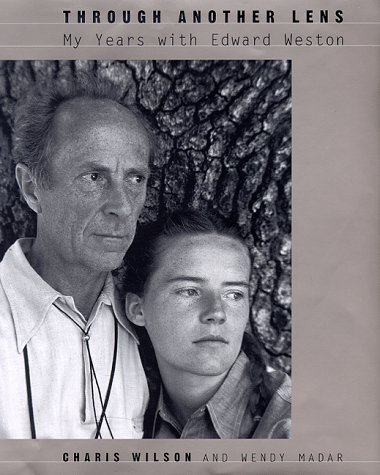 Through Another Lens: My Years With Edward Weston
by Charis Wilson
Publisher's Description
For eleven years Charis Wilson was Edward Weston's model, collaborator--she wrote California and the West--and wife. Over half the nude portraits Weston made in his career were of Wilson; John Szarkowski has pointed out that Weston's greatest work was produced during their years together. The quality of both recollection and writing that Wilson brings to this project is a gift to the photographic community. Essential reading for anyone interested in Edward Weston.
Amazon.com Review
Charis Wilson jump starts her recollection of her years with Edward Weston with a visit to Death Valley (where, as model and photographer, they made many of his most famous photographs) for the first time in nearly 50 years. From there she follows the flow of memory. Wilson was just 19 when she first met the 48-year-old photographer. Shortly after that first encounter, Weston jotted the following entry in one of his Daybooks: "I have not opened this book for almost 8 months--and with good reason; I have been too busy, busy living. I notice the last entry was 4-20. On 4-22 a new love came into my life, a most beautiful one, one which will, I believe, stand the test of time." Wilson remembers spotting a "short man in brown clothes" as she scanned a crowded room after a concert; he was Weston. Wilson soon became his model (she is the subject of more than half of his recorded nudes), then his lover, and ultimately his wife. Their relationship seemed to transcend that of artist and muse. The two worked alongside one another, she assisting him in the darkroom, he illustrating texts she wrote.

Wilson's memoir is filled with anecdotes about Weston's work methods and personal habits that his admirers will find delightful: Weston wore glasses to focus his shot, then yanked them off to view his subject so that each shot was achieved through a flurry of the glasses flying off and onto the photographer's face; he used a heavy tarp to transform the back of his Ford V-8 into a darkroom; he ambushed the sun, laying in the sand until it illuminated his subject just the way he desired; coated cats' whiskers with butter so they'd lick them, staying in one place long enough for him to take his shot; and had a penchant for foods that would revolt even the most iron stomached. These recollections combined with other details about their lives together, their friendships with Ansel Adams, Imogen Cunningham, Jack London and other luminaries and their work form a comprehensive if roseate view of Weston that is a substantial addition to what we know about the legendary photographer. --Jordana Moskowitz