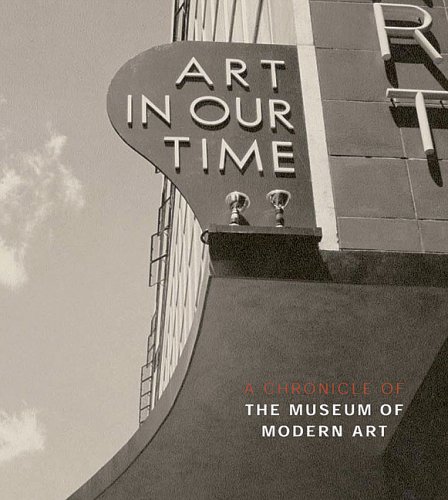 Art In Our Time
by Michelle Elligott
Publisher's Description
In the late 1920s, conservative policies were the norm among traditional museums-that is, until three progressive patrons of the arts decided to establish an institution devoted exclusively to modern art. When The Museum of Modern Art was founded in 1929, its first director, Alfred H. Barr, Jr., dedicated it to helping people understand and enjoy the new visual arts of the time, his hope was that this new institution would offer New York 'perhaps the greatest museum of modern art in the world.' The public responded with enthusiasm-and has continued to do so over the history of the Museum's extraordinary development: from an initial gift of eight prints and one drawing, MoMA's collection has grown to include over 100,000 paintings, sculptures, drawings, prints, photographs, architectural models and drawings, and design objects; 19,000 films and four million film stills; and 160,000 books, artists' books, and periodicals. Published on the occasion of the Museum's 75th birthday and the opening of its new building, Art in Our Time: A History of MoMA, is a picture book of historical photographs and archival documents, many of which have never before been published. Included are images of the various Museum buildings and gardens, from its original home in the Heckscher Building at the corner of Fifth Avenue and 57th Street, to its present location in Yoshio Taniguchi's complex on 53rd Street; installation shots of major exhibitions and important events at the Museum, and photographs of curatorial staff and Museum officials whose discerning policies helped shape our understanding of modern art. Documents include excerpts from letters, invitations, and other archival material that tell the story of The Museum of Modern Art from its beginnings to the present. The book is divided into eight sections starting with documentation of the modern art scene in New York prior to the Museum's opening; and then offering a chronology that covers the museum's 75-year history in seven parts divided into 10- to 15-year increments.
ISBN: 0870700014
Publisher: The Museum of Modern Art, New York
Hardcover : 240 pages
Language: English
Dimensions: 9.5 x 10.7 x 1.3 inches