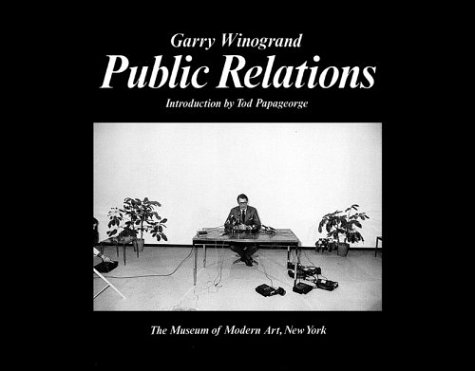 Garry Winogrand: Public Relations
by Garry Winogrand
Publisher's Description
(What Winogrand) has given us in these photographs is a unilateral report of how we behaved under pressure during a time of costumes and causes, and of how extravagantly, outrageously, and continuously we displayed what we wanted. -Tod Papageorge-Public Relations is a distillation of a photographic project begun by Garry Winogrand in 1969 when he was awarded a Guggenheim Fellowship to photograph what he called 'the effect of media on events.' With his characteristic zeal, passion, spontaneity, and intensity, Winogrand photographed an array of public events including museum openings, press conferences, sports games, demonstrations, award ceremonies, a birthday party, and a moon shot. The photographs depict our emerging dependence on the media as well as how the media changes and sometimes even creates the event itself. First published to accompany a 1977 exhibition at The Museum of Modern Art, New York.
ISBN: 0870706322
Publisher: The Museum of Modern Art, New York
Hardcover : 112 pages
Language: English