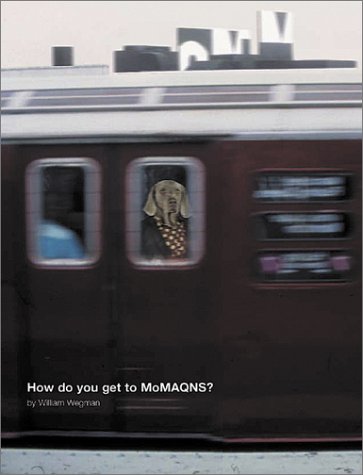 Journeying to Queens, one of New York City's outer boroughs, is a much easier and more pleasant experience than the average urbanite would imagine. With the temporary relocation of The Museum of Modern Art, New York, to its new quarters at the old Swingline staple factory, the trip becomes a necessity for any art lover. But how do you get there? Do you take the Concord? A ferry boat? Can you walk? How far is it? And how will you know when you're there? Fear these travels not-William Wegman and the ever ominous, sensitive, brooding Chip, the youngest of Wegman's brood of weimaraners, are here to map out the way to MoMA QNS. Join Chip as he shuttles from Manhattan into Long Island City on the 7 train, alight from the subway with him at Queens Boulevard and 33rd Street, and stroll together along Queens Boulevard, the Champs Elysee of Long Island City. Voila, there you are at MoMA ONS, a striking, long blue building, complete with 160,000 square feet of recently redesigned space for exhibition galleries, study centers, workshops, storage, offices, and a cafe/bookstore. Enjoy the trip!

William Wegman grew up in Western Massachusetts, attended art school in Boston and Illinois, taught in Wisconsin, then made his way out to California in 1970, where he got his first weimaraner, Man Ray. Man Ray became a central figure in Wegman's photographs and videotapes, and moved back to New York with Wegman in 1972, where they collaborated for twelve years. In 1986, Fay Rayjoined the Wegman family; since then, the brood has grown to include her son Chondo, her daughters Crooky and Battina, and Battina's son Chip. Wegman's photographs, videotapes, paintings, and drawings have been exhibited in museums and galleries internationally, including at The Museum of Modern Art, New York. In addition to video segments that have appeared regularly on Sesame Street since 1989, Wegman has also created film and video works for Saturday Night Live and Nickelodeon. His book projects include Cinderella, Little Red Riding Hood, ABC, 123, Circle Triangle Square, Farm Days, and Mother Goose. Wegman and his extended family currently live and work in New York.
ISBN: 0870706896
Publisher: The Museum of Modern Art, New York
Hardcover : 24 pages
Language: English
Dimensions: 6.7 x 8.7 x 0.3 inches