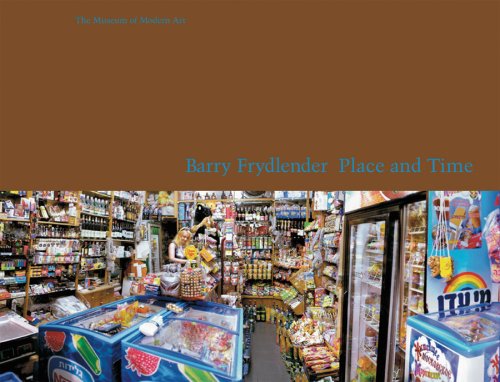 Barry Frydlender: Place and Time
by Barry Frydlender
Publisher's Description
Born in Tel Aviv in 1954, Barry Frydlender has been exploring the potential of digital technology for more than a decade, and over the past five years his experiment has gathered greater momentum. Each of his panoramic photographs is put together from dozens, sometimes hundreds, of shots that may have taken minutes or months to accumulate. Filled with people and things, these works reward slow, patient looking, and the invitation to do so is especially pertinent to the pictures reproduced in this book. This publication, which accompanies a Spring 2007 exhibition at The Museum of Modern Art, concerns only one aspect of Frydlender's work-those pictures that deal with life in contemporary Israel. Frydlender's Israeli panoramas includes Arab and Jew, Ashkenazim and Sephardim, secular and religious, rich and poor, young and old. All of his subjects are treated with equanimity, which is the hallmark of his art. Much of the most ambitious art of the past few decades has drawn its themes and its creative energy from the polemics of group identity. Frydlender's recent work is all the more remarkable against that background, for its attentiveness to each individual group is rooted in its recognition of their multiplicity.
ISBN: 0870707183
Publisher: The Museum of Modern Art, New York
Hardcover : 48 pages
Language: English
Dimensions: 12.5 x 9.5 x 0.5 inches