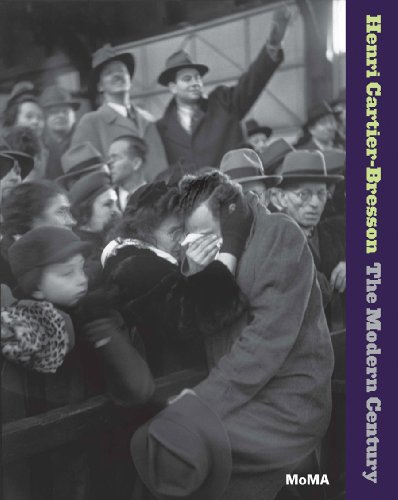 Henri Cartier-Bresson: The Modern Century
by Henri Cartier-Bresson
Publisher's Description
Henri Cartier-Bresson (1908–2004) is one of the most influential and beloved figures in the history of photography. His inventive work of the early 1930s helped define the creative potential of modern photography. FollowingWorld War II, he helped found the Magnum photo agency,which enabled photojournalists to reach a broad audience through magazines such as Life while retaining control over their work. Cartier-Bresson would go on to produce major bodies of photographic reportage, capturing such events as China during the revolution, the Soviet Union after Stalin’s death, the United States in the postwar boom and Europe as its older cultures confronted modern realities. Published to accompany an exhibition at The Museum of Modern Art, this is the first major publication to make full use of the extensive holdings of the Fondation Henri Cartier-Bresson—including thousands of prints and a vast resource of documents relating to the photographer’s life and work. The heart of the book surveys Cartier-Bresson’s career through 300 photographs divided into 12 chapters.While many of his most famous pictures are included, a great number of images will be unfamiliar even to specialists. A wideranging essay by Peter Galassi, Chief Curator of Photography at the Museum, offers an entirely new understanding of Cartier-Bresson’s extraordinary career and its overlapping contexts of journalism and art. The extensive supporting material—featuring detailed chronologies of the photographer’s professional travels and of spreads of his picture stories as they appeared in magazines— will revolutionize the study of Cartier-Bresson’s work.
ISBN: 0870707787
Publisher: The Museum of Modern Art, New York
Hardcover : 376 pages
Language: English
Dimensions: 9.8 x 1.6 x 12.2 inches