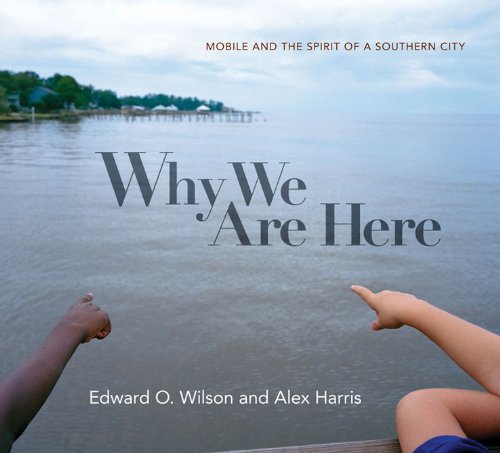 Why We Are Here: Mobile and the Spirit of a Southern City
by Edward O. Wilson
Publisher's Description
From this historic collaboration between a beloved naturalist and a great American photographer emerges a South we’ve never encountered before.

Entranced by Edward O. Wilson’s mesmerizing evocation of his Southern childhood in The Naturalist and Anthill, Alex Harris approached the scientist about collaborating on a book about Wilson’s native world of Mobile, Alabama. Perceiving that Mobile was a city small enough to be captured through a lens yet old enough to have experienced a full epic cycle of tragedy and rebirth, the photographer and the naturalist joined forces to capture the rhythms of this storied Alabama Gulf region through a swirling tango of lyrical words and breathtaking images. With Wilson tracing his family’s history from the Civil War through the Depression—when mule-driven wagons still clogged the roads—to Mobile’s racial and environmental struggles to its cultural triumphs today, and with Harris stunningly capturing the mood of a radically transformed city that has adapted to the twenty-first century, the book becomes a universal story, one that tells us where we all come from and why we are here.
ISBN: 0871404702
Publisher: Liveright
Hardcover : 240 pages
Language: English
Dimensions: 10.9 x 9.5 x 1.1 inches