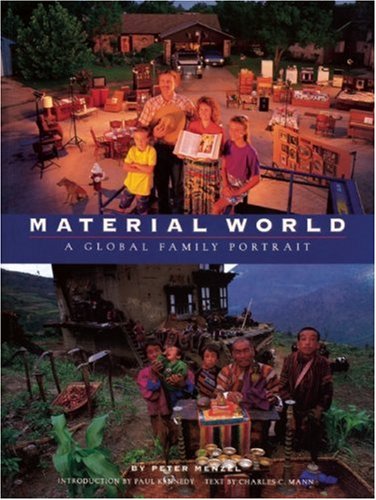 Material World: A Global Family Portrait
by Paul Kennedy
Publisher's Description
A fascinating socio-economic study, this book looks into the homes and posessions of 30 different families around the world. From the United States to Mongolia, it is a comprehensive overview of the cultural and economic contexts of the present day. With informative texts accompanying intriguing photographs, Material World is a stunning resource for anyone interested in cultivating a larger world-view.
Amazon.com Review
In honor of the United Nations-sponsored International Year of the Family in 1994, award-winning photojournalist Peter Menzel brought together 16 of the world's leading photographers to create a visual portrait of life in 30 nations. Material World tackles its wide subject by zooming in, allowing one household to represent an entire nation. Photographers spent one week living with a "statistically average" family in each country, learning about their work, their attitudes toward their possessions, and their hopes for the future. Then a "big picture" shot of the family was taken outside the dwelling, surrounded by all their (many or few) material goods.

The book provides sidebars offering statistics and a brief history for each country, as well as personal notes from the photographers about their experiences. But it is the "big pictures" that tell most of the story. In one, a British family pauses before a meal of tea and crumpets under a cloudy sky. In another, wary Bosnians sit beside mattresses used as sniper barricades. A Malian family composed of a husband, his two wives, and their children rests before a few cooking and washing implements in golden afternoon light. Material World is a lesson in economics and geography, reminding us of the world's inequities, but also of humanity's common threads. An engrossing, enlightening book. --Maria Dolan