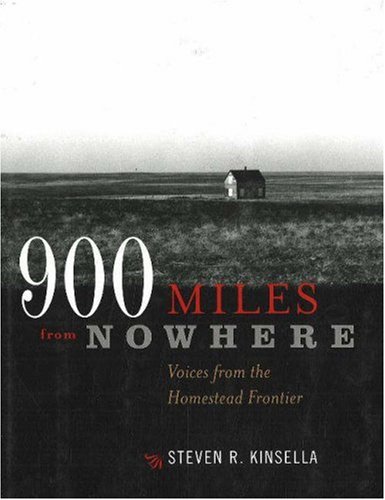 900 Miles from Nowhere: Voices from the Homestead Frontier
by Steven R. Kinsella
Publisher's Description
It was on the vast American prairie that people from around the world seized the opportunity for personal and economic freedom promised by free land. Traveling across oceans and continents, these hard-nosed, pragmatic people began arriving in the 1860s with shovels and plows, convinced they were part of something important. They were. Putting hand to plow and breaking the sod for their first crude homes, these hardy settlers left an indelible thumbprint on American history and on the country’s character. Though many of their ventures ended in failure, their risks permanently enhanced the nation’s diversity and its sense of independence and resourcefulness.

900 Miles from Nowhere is the heartfelt chronicle of the daily lives and personal struggles of Great Plains homesteaders, told in their own voices through many never-before-published letters, diaries, and photographs. Believing absolutely that they could control their own destiny, they bet everything they owned, even in the face of insurmountable obstacles. This is the remarkable and ever-inspiring story of life on the grasslands that stretch from Canada to Mexico. The voices of Great Plains homesteaders soar from deeply personal letters, diary entries, and vivid photographs, revealing the promise and hardship of early life on the American grasslands.
ISBN: 0873515722
Publisher: Minnesota Historical Society Press
Hardcover : 216 pages
Language: English
Dimensions: 8 x 10 x 0.7 inches