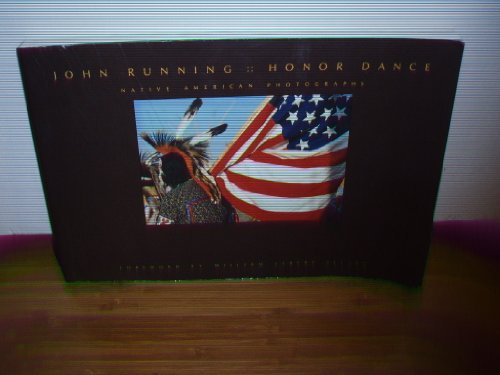 Honor Dance: Native American Photographs
by John Running
Amazon.com Review
It is a widely held--but false--notion that the Hopi do not want to be photographed because they feel the camera will steal their spirit. The real reason, says John Running, is that "they don't want photographs taken that make them feel like curiosities." Running, in the words of a Navajo friend, "takes pictures of the truth," which not only describes his remarkably candid photographs, but also explains how he got them. Here in color and black and white are images of Native Americans of many tribes, deliberately and proudly posing for portraits in their homes and Running's makeshift studios, doing ceremonial dances, and above all, being themselves.
Publisher's Description
With fifteen years of work on Indian reservations John Running has produced a volume of compassionate photographs of Native Americans. Running's photographs of Indians from a variety of tribes in both ceremonial and more personal, daily activities are informed by a trust earned through patient work with his subjects. An eloquent chronicle of contemporary Native American life and culture.
ISBN: 0874171008
Publisher: Univ of Nevada Pr
Hardcover : 155 pages
Language: English