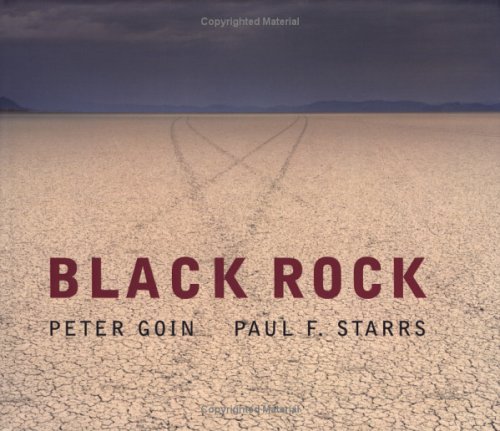 Black Rock
by Paul F. Starrs
Publisher's Description
Nevada’s mysterious Black Rock country is a haunting landscape that has been the focus of study and contemplation by scientists, explorers, outdoors aficionados and artists. The Black Rock, a desert realm almost the size of Delaware, embraces the mile-high vertical mountains of the Granite Range as well as the playa, one of the earth’s flattest, most barren salt pans. The area’s diverse environment ranges from boiling hot springs and plants that have evolved to survive the severest drought to freezing winters and lush pockets of rich grasses. Black Rock presents the viewer with a range of images focusing on the geology and the effects of human presence on the area; from ancient Native Americans to nineteenth-century explorers, ranchers and miners as well as the congregants of the Burning Man event.

Peter Goin is the author of numerous books including Nuclear Landscapes (1991) and A Doubtful River (2000). In 1994 he received an Emmy nomination for his film In Search of Ritual: The Burning Man. Goin has been photographing the Black Rock desert throughout his career. Paul Starrs has been studying the geography of the Black Rock for nearly 12 years. He is the author of Let the Cowboy Ride – Cattle Ranching in the American West (1998) and has won numerous awards for his teaching of cultural and historical geography.