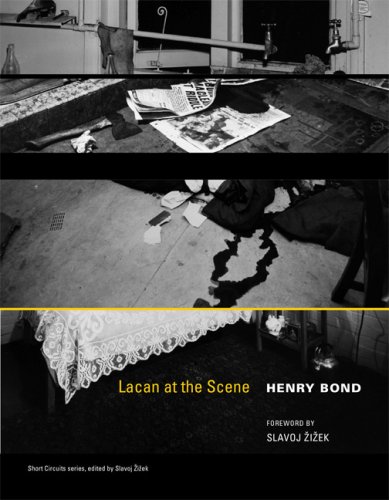 Lacan at the Scene
by Slavoj Zizek
Publisher's Description
What if Jacques Lacan—the brilliant and eccentric Parisian psychoanalyst—had worked as a police detective, applying his theories to solve crimes? This may conjure up a mental film clip starring Peter Sellers in a trench coat, but in Lacan at the Scene, Henry Bond makes a serious and provocative claim: that apparently impenetrable events of murder and violent death can be more effectively unraveled with Lacan's theory of psychoanalysis than with elaborate, technologically advanced forensic tools. Bond's exposition on murder expands and develops a resolutely Žižekian approach. Seeking out radical and unexpected readings, Bond unpacks his material utilizing Lacan's neurosis-psychosis-perversion grid.

Bond places Lacan at the crime scene and builds his argument through a series of archival crime scene photographs from the 1950s—the period when Lacan was developing his influential theories. Bond takes us inside the perimeter set by police tape and guides us into a series of explicit, even terrifying, murder scenes. It is not the horror of the ravished and mutilated corpses that draws his attention; instead, he interrogates seemingly minor details from the everyday, isolating and rephotographing what at first seems insignificant: a single high-heeled shoe on a kitchen table; carefully folded clothes placed over a chair; a plate of chocolate biscuits on a dinner table; lewd graffiti inscribed on a train carriage door; an arrangement of workman's tools in a forest clearing. From these mundane details he carefully builds a robust and comprehensive manual for Lacanian crime investigation that can stand beside the FBI's standard-issue Crime Classification Manual.
ISBN: 0262013428
Publisher: The MIT Press
Hardcover : 256 pages
Language: English
Dimensions: 7.2 x 9.1 x 1.1 inches