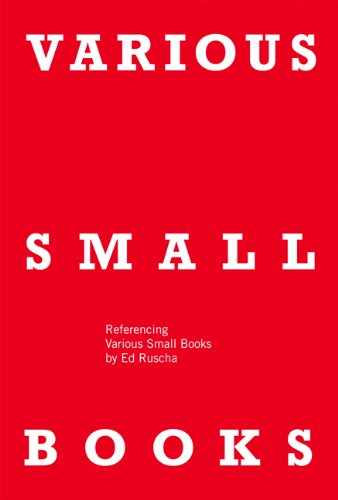 VARIOUS SMALL BOOKS: Referencing Various Small Books by Ed Ruscha
by Jeff Brouws
Publisher's Description
In the 1960s and 1970s, the artist Ed Ruscha created a series of small photo-conceptual artist’s books, among them Twentysix Gas Stations, Various Small Fires, Every Building on the Sunset Strip, Thirtyfour Parking Lots, Real Estate Opportunities, and A Few Palm Trees. Featuring mundane subjects photographed prosaically, with idiosyncratically deadpan titles, these “small books” were sought after, collected, and loved by Ruscha’s fans and fellow artists. Over the past thirty years, close to 100 other small books that appropriated or paid homage to Ruscha’s have appeared throughout the world. This book collects ninety-one of these projects, showcasing the cover and sample layouts from each along with a description of the work. It also includes selections from Ruscha’s books and an appendix listing all known Ruscha book tributes.

These small books revisit, imitate, honor, and parody Ruscha in form, content, and title. Some rephotograph his subjects: Thirtyfour Parking Lots, Forty Years Later. Some offer a humorous variation: Various Unbaked Cookies (which concludes, as did Ruscha’s Various Small Fires, with a glass of milk), Twentynine Palms (twenty-nine photographs of palm-readers’ signs). Some say something different: None of the Buildings on Sunset Strip. Some reach for a connection with Ruscha himself: 17 Parked Cars in Various Parking Lots Along Pacific Coast Highway Between My House and Ed Ruscha’s.