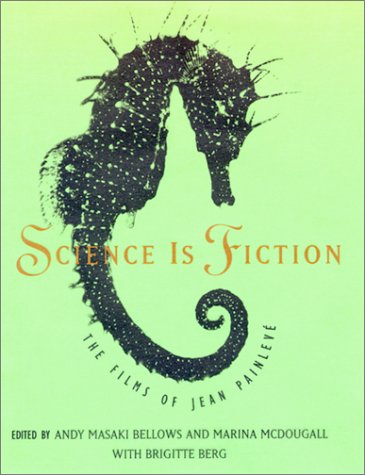 Science Is Fiction: The Films of Jean Painlevé
by Andy Masaki Bellows
Publisher's Description
One of the first to plunge underwater with a camera to bring the subaquatic world to the screen, maverick scientific documentary filmmaker Jean Painlevé (1902-1989) captured the throes of a male seahorse giving birth, the geometric choreography of crystal formation, and the mating habits of hermaphrodite mollusks. In a lifetime spanning nearly the history of cinema itself, Painlevé made over 200 films, including The Seahorse, Freshwater Assassins, The Vampire, and The Love Life of the Octopus. His lyrical and instructive animal behavior films set to avant-garde scores were much admired by Surrealist contemporaries such as Antonin Artaud, Luis Buñuel, and Jean Vigo. Science Is Fiction includes Marina McDougall's historically informative 'Hybrid Roots,' Brigitte Berg's heavily illustrated biographical essay 'Contradictory Forces,' art critic Ralph Rugoff's 'Fluid Mechanics,' a Libération interview with Painlevé, stills from Painlevé's most celebrated films laid out in storyboard fashion, and a selection of Painlevé's writings appearing for the first time in English. The latter include 'Neo-Zoological Drama,' a playful romp on the behavior of Turbellaria, or flatworms; 'Mysteries and Miracles of Nature,' an idiosyncratic catalog of unusual animal behavior; and 'Scientific Film,' a discussion of science films that pays homage to Painlevé's fellow pioneers. The book also includes French film critic André Bazin's 'Science Film: Accidental Beauty,' a review of the 1947 International Association of Science Film festival, organized by Painlevé.
Amazon.com Review
The trouble with scientists monopolizing the investigation of the natural world is that they don't always know what questions to ask. Science Is Fiction: The Films of Jean Painleve explores the work of a man interested in mathematics, art, medicine, and biology, who showed early cinema audiences the alien beauty of the sea and its creatures. Son of a French prime minister, Painleve studied natural science when it was a luxury, but he allied himself with the Surrealists and anarchists who caused such trouble in the 1920s and thereafter. Capable of grossing out Luis Buñuel but also inspiring a pan-European seahorse frenzy through his art, Painleve comes under critical analysis in this volume, which includes his own writings, stills and quotes from his films, notes from contemporaries including Leo Sauvage, and modern appreciations and listings of his work.

The pictures come close to capturing the essence of his magic, but his words are more evocative of his artistic sensibility, one that rejects humanization of nonhuman subjects and tells stories regardless of their potentially shocking or subversive themes. Providing the world with alternative means of examining art, science, and nature, Jean Painleve deserves much wider recognition from everyone he has influenced; Science is Fiction is a mighty leap in the right direction. --Rob Lightner