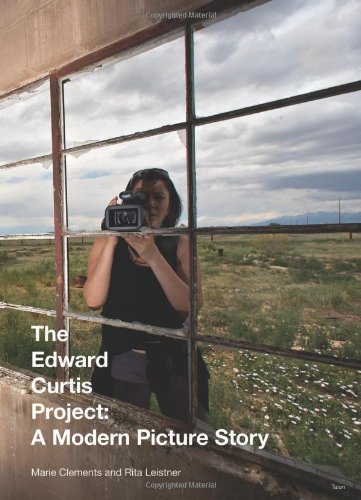 The Edward Curtis Project: A Modern Picture Story
by Rita Leistner
Publisher's Description
Edward Curtis saw his job as that of creating a photographic record of “the vanishing race of the North American Indian.” His work therefore became as much a projection of colonial attitudes upon aboriginal peoples as it was an authentic record of their lives.

The Edward Curtis Project began when the Presentation House Theatre commissioned Marie Clements to write a play that would stage the issues raised by Curtis’ monumental but controversial achievement—to dramatize not only the creation of his twenty-volume photographic and ethnographic epic and the enormous commitment, unwavering vision, sacrifice, poverty and ultimate disappointment it represented for the photographer, but also the devastating legacy that his often misrepresentative and imposed vision had on the lives of the people he touched.

Upon receiving the commission, Marie Clements immediately asked photojournalist Rita Leistner to create a parallel photographic investigation of Curtis’ work—to question the practice of documentary photography with the very medium under scrutiny. After two years of retracing Curtis’ footsteps, travelling to First Nations communities throughout North America, Clements finally felt that between them: “We were making our own pictures out of our own beliefs and they were adding up. We were inside the lies and beauty of history, of gender and class, we were making a case for the future.”

This collaborative work of two artists, to take Curtis’ photographs to heart and to see who and what might live inside them today, resulted in a profoundly moving new drama by Marie Clements, and a spectacular contemporary photo exhibit by Rita Leistner. Published together here, they illustrate the trauma that the notion of a “vanishing race” has inflicted on an entire people, and celebrate the triumph of a future in which North American First Nations communities “are everywhere and it is beautiful.”
ISBN: 0889226423
Publisher: Talonbooks
Paperback : 160 pages
Language: English
Dimensions: 6.6 x 9.5 x 0.7 inches