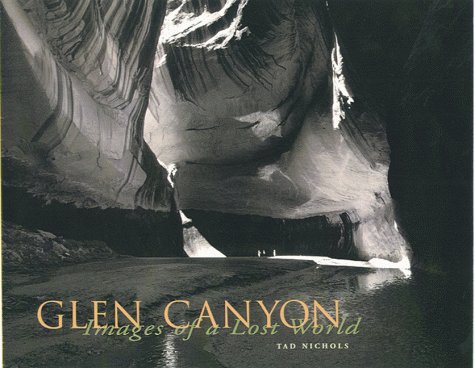 Glen Canyon: Images of a Lost World
by Tad Nichols
Publisher's Description
The setting for Eliot Porter's famous The Place No One Knew, Glen Canyon is revealed in stunning black-and-white images taken by Porter's guide before this stunning place was flooded by Lake Powell.
Amazon.com Review
In the early 1960s the federal government announced a plan to control the Colorado River by building a series of hydroelectric dams. The plan set off a storm of protest. The Sierra Club filed a lawsuit, arguing that one of those dams, to be built at the entrance to the Grand Canyon, would mean the destruction of Glen Canyon, a jewel-like oasis, one of the most beautiful natural wonders of the desert Southwest. But the lawsuit failed, and the dam was built, resulting in the formation of 200-mile-long Lake Powell, one of the largest artificial bodies of water on the planet--and in the inundation of Glen Canyon, which environmentalists called "the place no one knew."

Photographer and filmmaker Tad Nichols did know Glen Canyon, so well that many of the area's place names are the ones that he and his fellow explorers and friends gave them. In this stunning book of documentary photography, Nichols takes readers on a voyage down the Colorado River, traversing stone labyrinths, wild rapids, and narrow beaches. Accompanied by entries from his travel journals of the 1950s and early '60s, his photographs show us just how much was lost when Glen Canyon receded beneath Lake Powell's waters--and what we stand to regain if, as advocates hope, Glen Canyon Dam is dismantled and the Colorado River is allowed to flow freely once again. --Gregory McNamee